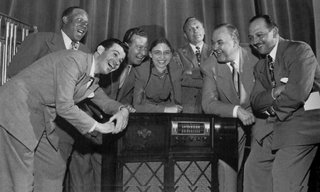 Well, the 20th Cincinnati Old Time Radio and Nostalgia Convention is over and it ended with the announcement that, in spite of rumors to the contrary, there WILL be a 21st! I took pictures but can't afford to get them developed right now. It’s long since gotten to the point where my wife and I consider it as more of a family reunion than a convention. Oh, we hit the dealers’ room (picked up a copy of the terrible 1975 Superman TV musical!) but even it seemed considerably shrunken this year. As far as the re-creations, one of my two roles fell through due to various misunderstandings but the other was a juicy one in a SAM SPADE episode. My wife, Rene, ended up stealing that show, though, as a cackling witch! Still a treat to watch this year’s old pros including Bob Hastings, Hal Stone and LONE RANGER and DICK CAVETT SHOW announcer Fred Foy in action!
The bigger treat for us, though, was to hang with some of the OTR collector friends we’ve made over the past couple decades, kindred spirits that we see only once a year. Among these, as ever, are the inimitable Derek Tague, author Martin Grams and the Hughes Family, 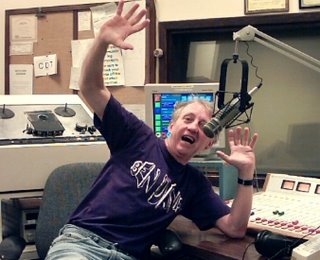 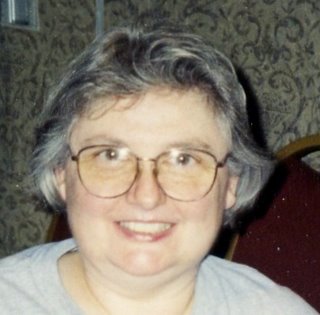 and Karen Hughes, who, as a family won this year’s Dave Warren Award for promoting old-time radio through re-creations. My wife and I, as last year’s winners, were asked by Derek Tague to help present the Warren Award to the Hughes Family. They, of course were oblivious to it. In a bizarre twist, we were also asked by someone else to help present a surprise award to Derek himself! The Hughes family WERE aware of this! Thus, we shared two secrets all weekend. We winked at Derek about the Hughes family award and we winked at the Hughes family about Derek’s surprise! 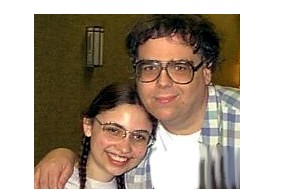 While they do perform, and quite well I might add, Dan and Kathy’s biggest re-creation is their daughter Karen, arguably the world’s biggest Jack Benny fan. Karen Hughes, grew up with her parents love of radio and has never hesitated to act as a missionary for the art form. An excellent actress herself, Karen, now 22, began coming to the Cincinnati Convention when she was only 11 years old 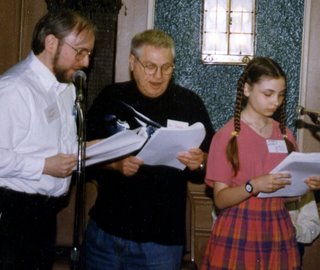 and was cast as a little girl in a LONE RANGER script. This year, she re-created that role in a new, more star-filled re-re-creation of that same script.
Karen’s greatest love, however, is Jack Benny. She has converted classmates, boyfriends and now, her own students to the joys of radio comedy through Jack. As a huge Benny fan myself, I have been passing on Benny memorabilia to her for several years. This year, I presented her with a framed copy of the photomanipulated shot topping this article in which she, herself, replaces Mary Livingstone in the 1940’s Benny Show cast. 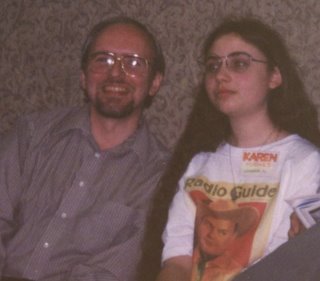 A few years back, I also published an interview with the world's greatest Jack Benny fan in the magazine OLD-TIME RADIO DIGEST in which I referred to Karen as the very future of Old-time Radio. That still holds true. Old-Time Radio can only remain "old" for so long. If the new generations don’t discover it as a viable art form in and of itself, it WILL go the way of vaudeville. If that happens, it certainly won’t be Karen Hughes’ fault! 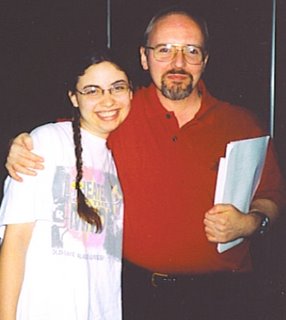 Dan Hughes and Kathy Hughes(the first person to request my autograph) are pictured above and Karen Hughes is pictured over the years with Derek Tague, myself and Ken Borden.
Posted by Booksteve at 10:40 AM