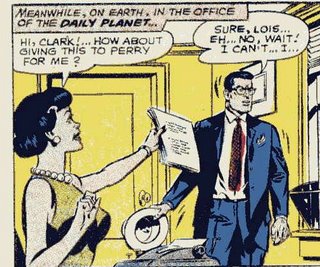 The fact that DC Comics rarely let the great Jack Kirby's version of Superman or Jimmy Olsen run without being retouched (or often completely redrawn) during the King's early seventies run remains a source of some controversy amongst Kirby fans. More often than not, Al Plastino's Supes or Murphy Anderson's Jimmy interacted with Jack's New Gods characters. As I pointed out in my previous post, though, Jack was hardly the only one to recieve this treatment. In fact, you'd be hard pressed to find a Marvel comic during a long period in the seventies that didn't have sometimes jarring John Romita heads on characters drawn by other artists. Heck, even the classic HULK ANNUAL number one with it's sweaty Steranko cover features a Marie Severin pasteover face! In fact, the very next comic I picked up this morning, ACTION number 342 from 1966 features a late Wayne Boring Superman story but, rather obviously to any Superman Family fan of the sixties, a Kurt Schaffenberger face on Lois Lane! Apparently the man who had drawn the series regularly for about two decades at that point couldn't draw a Lois that editor Mort Weisinger thought looked like Lois.
Posted by Booksteve at 10:15 PM