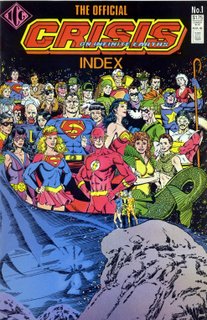 With DC’s current CRISIS getting more and more overblown and convoluted with every passing month, maybe what they need is a handy guide such as these two turned out by Mark Waid and Lou Mougin for the original CRISIS back in 1986. Independent Comics Group seemed to be some sort of off-shoot of Dean Mullaney and cat yronwode’s (she always eschewed caps. I forgot that last time) Eclipse Comics run by Murray Ward. The only things they published, if memory serves, were DC index volumes in a format pioneered by Marvel earlier with Spidey and FF index series. There was one for ALL-STAR COMICS, several for the Legion of Super-Heroes, one for Hawkman, one for CRISIS ON INFINITE EARTHS and one for all of the CRISIS crossovers. All of them LOOKED like actual DC comics with cool covers by 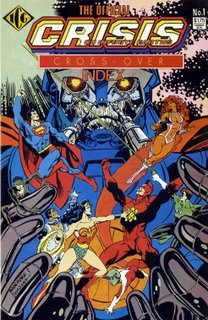 Curt Swan, Jim Mooney and, here, George Perez, Tom Mandrake and Jan Duursema. All of them were obsessive in their continuity details and after reading them you actually understood it all…but boy, did your head hurt! Speaking of heads hurting, I need to go do my taxes now. Talk about a crisis!
Posted by Booksteve at 9:03 AM