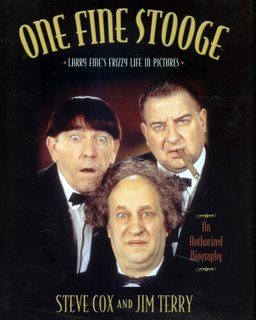 It’s been said that one of the true differences between the sexes is that women simply don’t "get" the Three Stooges. I have found this to be true more often than not. While women abhor their "violence," males of all ages tend to love them and appreciate them for their humor and good-naturedness.
Beginning with Moe Howard’s posthumously published autobiography the history of the Three Stooges has been chronicled in more volumes than the boys themselves could have ever imagined. Some are very good, some less so. All tell the story of the three (okay, make that ultimately six) guys who started out being second bananas and finally, long past what was thought to have been their prime, arguably became the biggest stars of the sixties after Batman, the Beatles and 007.
ONE FINE STOOGE by Stephen Cox and Jim Terry is the latest worthy book on the Stooges, a photo-filled authorized biography of frizzy-haired Larry Fine. The authors were granted unprecedented access to Larry’s friends, pictures and papers so there are many great stories here that have not been told before (including the controversies that led to Larry virtually disowning his OWN book, STROKE OF LUCK after the co-author screwed around with the facts).
Larry was, as in the title of his brother’s previous book, THE STOOGE IN THE MIDDLE and often served as a foil to both Moe and whoever was filling the third spot. On occasion he was given memorable bits but for the most part he was required to be there simply because the dynamics of the act didn’t work without him. In the extensive biographical bits about the real man, Larry comes across as nice. Very nice. He seems to have been a quiet, amusing man who would do anything to help someone out. He stayed with his abusive, alcoholic wife until her death out of pure love and rarely let any of his personal sorrow keep him from making someone laugh. 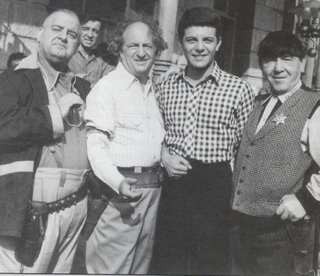 A remembrance in the book by fellow Philadelphian Frankie Avalon recalls Larry as just a regular guy that the young singer liked hanging out with on sets, talking about the old neighborhood.
After the Stooges initial film career ground to a halt with ever diminishing returns in the late fifties, the act’s contract was terminated. As their old shows were rediscovered by kids on television, their career was revived and before long they were doing full length features and filling stadiums in personal appearances. Throughout the sixties, the boys did movies, TV appearances, cameos, and charity events. The last time I saw Larry, Moe and Curly Joe was on a 1969 episode of the game show TRUTH OR CONSEQUENCES where I was absolutely flabbergasted to see how short they all were next to Bob Barker. According to the book, this was their final TV appearance. In 1970, while working on a TV pilot called KOOK’S TOUR (that was eventually released on 8MM film of all things!), Larry had a stroke and ended up in the Motion Picture Country Home. Far from stopping him, though, as Larry recovered enough to do so, he became more involved in charity work than ever, occasionally, as seen here, even abetted by his old crony, Moe. 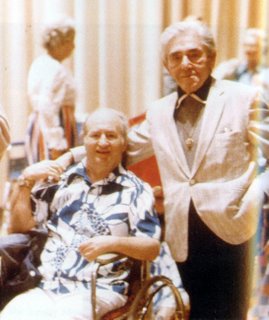 As I said, Cox and Terry have come up with a worthy addition to Stooge history. Was it necessary? Perhaps not. It is, however, a fascinating portrait of a man everyone knows and yet few people really knew. Now if only someone would do a definitive bio on Shemp, the funniest one of them all and a great character actor to boot!
Posted by Booksteve at 10:01 AM