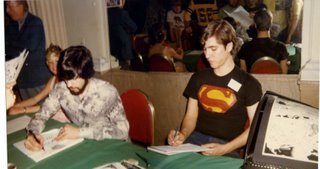 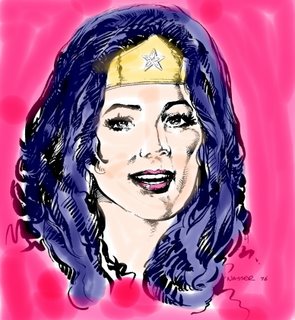 When bearded, long-haired writer Alan Moore says something outrageous that makes you think in ways you hadn’t thought before, fandom calls him an eccentric genius. When bearded, long-haired artist Michael Netzer says something outrageous that makes you think in ways you hadn’t thought before, fandom calls him "bat-shit crazy." What’s the difference? Religion. To be more specific, Michael Netzer has, particularly with the advent of the internet, very publicly shared parts of his long personal spiritual odyssey and, like Steve Ditko with his hardcore objectivist philosophies, fandom just does not want to hear it.
In 1980 I took a Greyhound from Cincinnati to Columbus to meet one of my illustrative idols, Jim Steranko, at a comic book convention. I met him, he was cool, we talked and he autographed a Batman piece from MEDIASCENE for me. What I most remember about this particular convention, however, is meeting Mike Nasser. Mike is seen at left in the above photo with Bob Layton (who attended every single comic con in Ohio and Indiana in those days. It was like a rule.) and Columbus’s duly elected "Comic Book Queen," a nice, wholesome, friendly young woman who seemed to know nothing at all about comic books. Both Layton and Nasser were sketching away but Layton was lost in his art, speaking only when spoken to, while Nasser was working the crowd, enthralling everyone with details of what he was doing and why he was doing it as well as talking about upcoming work. He had, like Jerry Bingham, Bill Sienkciewcz and others, been dubbed a "Neal Adams clone" by comics fandom but, hey, you had to start somewhere. How many comics illustrators started out tracing Jack Kirby poses? The faces on Nasser’s characters were Adams-like but his bodies tended to be leaner and quite frankly, I enjoyed his inventive cover layouts more than those of his inspiration. In fact, his mostly DC work in the mid to late seventies had made him a favorite of mine. He had done a few WONDER WOMAN stories, some LEGION OF SUPER-HEROES, KOBRA and a whole bunch of nifty backup stories across the line. At Marvel, he even drew SPIDER-MAN.
A few years later, though, Mike Nasser’s art was nowhere to be seen in comics. I presumed that, like many before him, he had taken his talents into more lucrative fields. Then one day, I read in CBG that he had adopted the Hebrew spelling of his name (Netzer) and moved to Israel where he was starting a line 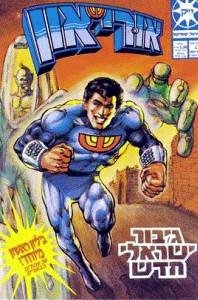 of super hero comics including one they showed that looked to me a lot like Adams’ MEGALITH. It was actually called URI-ON. I looked for years for that comic at conventions (I don’t read Hebrew but my wife does!) but never found it. Again, since I knew Netzer’s talent, I presumed it was a success. I found out later it only ran a few issues, possibly because of politically-charged content. 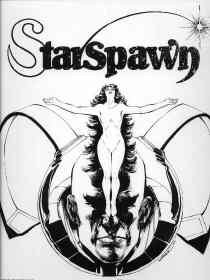 Jump ahead more years and Michael Netzer reappears in mainstream US comics with a sharper, much more unique style. Then , however, he turns up with his own website, looking for all the world like Jesus Christ and sounding like him from time to time, also. The fan websites have a field day and the names start flying. The general presumption was/is that the man has gone off the deep end. He was living in a desert, talking about the endtimes, drawing and photo-collaging bizarre pieces for his website(Michael Netzer's FLAMING SWORD PRODUCTIONS - The Daily Flame ) and at the same time starting a comic book based political party! What th’?? Look closer, though, and read some of the actual interviews and articles ( http://www.adelaidecomicsandbooks.com/netzer.htm, Michael Netzer's New Comic Book of Life,Scream If You Want It - Lecturing the Workshop) he’s done recently and you see a man who’s simply utilizing his art, his background and his beliefs in his search for truth. One way or another, we all do it…just not so publically. 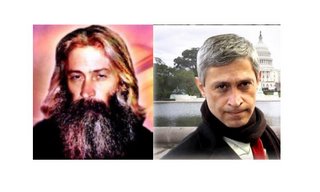 One former DC staffer described Michael Netzer on a message board as quiet and soft-spoken. That certainly doesn’t sound like the man I met at that long ago convention (which, according to the artist, was AFTER his spiritual awakening). Like all of us, he’s changed in 25 plus years. I don't really like to read books or articles by people who completely agree with me on things. In fact, I’ve always admired people who don’t think like I do. They broaden my perspective. They make me look at the world and myself in different ways. Many great comics creators can do that. Michael Netzer is certainly one of them.
Posted by Booksteve at 9:14 AM