Movies That Fell Through the Cracks # 1 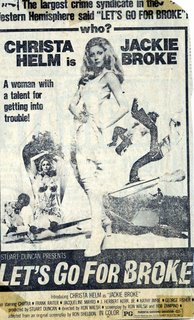 To inaugurate this new occasional series, we have a movie that seems to have COMPLETELY fallen through the cracks. I have never seen this picture and I have no reason whatsoever to believe it was particularly good but nothing deserves to be completely forgotten. LET’S GO FOR BROKE was released in 1974. I swear it was. I recall saturation radio advertising! It is NOT, however, listed in IMDB nor in Michael Weldon’s two Psychotronic books which list everything else I’ve ever noted as not being in IMDB. Of the folks associated with it, star Christa Helm is listed (as "Christ" Helm) but only for a cheesy horror film (directed by DEEP THROAT’s Gerard Damiano) and a WONDER WOMAN guest appearance (some time after which, apparently, she was murdered). There are several "Chitras" listed but without this film among them. Jacqueline Mayro, an unusual name so probably the same person, appeared in numerous things including the classic Mary Martin TV PETER PAN but not this picture according to IMDB. Neither the writers nor the director show any other credits. From the ad, as well as my recollection of the radio spots, it’s a female James Bond kind of thing, undoubtedly shot on an ultra-low budget, possibly on an island somewhere. With its PG rating, there probably wasn’t much T&A but nonetheless this was probably released as drive-in fare (by whoever. There’s no studio credit on the ad either!) I was going to a lot of movies in 1974 but, at 13, I couldn’t drive so drive-in flicks often escaped me. Still, I remember the cool-sounding radio ads and I wish I had seen it. It was probably pretty bad but, at a time when IMDB regularly lists the most obscure straight-to-video releases in actors’ credits, LET’S GO FOR BROKE doesn’t deserve to be so completely and utterly ignored! If any of you saw it, feel free to tell us more about it. Thanks. UPDATE: I found a recent bit on the Web that indicates that Christa Helm's daughter was working on a book about her mother and that the TV series CELEBRITY JUSTICE was (is?) doing a piece on her tragic stabbing murder. It mentions her appearance on WONDER WOMAN, throws in a STARSKY AND HUTCH but still doesn't mention what must have been her biggest break, the starring role in LET'S GO FOR BROKE!
Posted by Booksteve at 9:48 AM