Movies That Fell Through the Cracks # 6 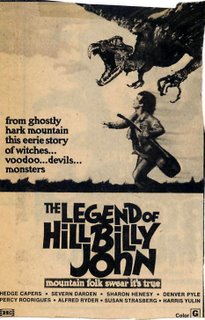 THE LEGEND OF HILLBILLY JOHN was a barely released 1974 movie based on well-known author Manly Wade Wellman's Silver John stories. Although he wrote regular fiction and science-fiction (as well as some scripts and non-fiction), the author is best remembered for his Appalachian balladeer horror stories but this is the only one that made it to the screen.
Improbably produced by CAGNEY AND LACEY’S Barney Rozensweig and directed by ONE STEP BEYOND’s John Newland, the film boasts an impressive cast of character actors including Second City alumnus Severn Darden, Susan Strasberg, Harris Yulin and, one of my favorites, the unfortunately monickered Percy Rodrigues. Topbilled as John is one Hedge Capers who, assuming he didn’t change his name, apparently never worked in show business again. Original music was by Hoyt Axton who seemingly could do no wrong in the seventies. Special effects were by Gene Warren who had an impressive credits list that included the stop motion work on the original LAND OF THE LOST.
IMDB describes the plot as "A wandering ballad singer in the Appalachians meets an ugly bird-type creature, is transported back in time, finds himself involved in the Devil's work." Their reviews offer fond recollections of fans of the books, all of whom cite the low budget restrictions of the movie. Steeped in the folk traditions of the Carolinas, Wellman’s tales would probably be hard to visualize as well as anything the books could display inside your own head. I find myself wondering, though, if the guitar carrying wanderer didn’t influence the folks who later brought you SIX-STRING SAMURAI.
You’re probably better off reading up on Wellman, himself , so here’s a link to a good source: The Voice of the Mountains
Posted by Booksteve at 8:17 AM