In late 1978, with the semi-success of the SPIDER-MAN newspaper strip (and the failure of THE VIRTUE OF VERA VALIANT), Marvel ventured once again onto the ink-stained pages of America’s newspapers with THE INCREDIBLE HULK. 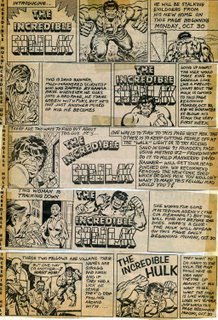 Of course, it didn’t hurt that the Hulk had been much more successful than Spidey on television. In fact, the newspaper Hulk was, as on TV, David Banner, not Bruce. Ostensibly written by Stan Lee (but I’d venture that they would more than likely put his name on it no matter who was actually writing it) and drawn by his brother Larry Lieber, the plots are fairly uninteresting and the action typically, as in most newspaper strips, drawn out. Aided either by a jarring variety of inkers or at least inking styles, Lieber’s artwork went from pretty good to rushed in a matter of weeks. Seen here is the cool "Coming Soon" ad that appeared in my local paper along with the introductory week of strips. It was not uncommon for newspaper syndicates to provide such strips to get readers up to speed when the series began in a new market. Noting the extremely crude lettering on these, I don’t think it’s a stretch to guess that these may have been cobbled together in-house by The Cincinnati Post themselves rather than distributed by the syndicate. I’m not certain how long THE INCREDIBLE HULK lasted in papers elsewhere but around here, the strip was gone pretty quickly, leaving ol’ Greenskin alone to sit in a corner and wait for Peter David to come along and make him interesting again.
Posted by Booksteve at 6:24 AM