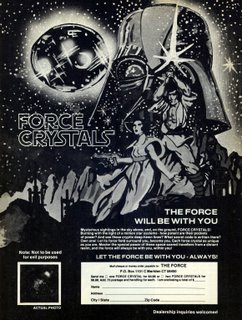 This "not to be used for evil purposes" FORCE CRYSTALS ad ran in various magazines in 1979-80. It comes astonishingly close to major trademark infringement with its rather obvious redrawn STAR WARS characters and use of variations on "May the Force be with you." What exactly are "force crystals?" Well, to read the ad is to have no clue. Someone worked overtime to NOT actually say anything in this ad! The "actual photo" certainly doesn’t help either. I have to believe that they were actually selling simple, tiny rock crystals and telling you to use your imagination to pretend them to be "space SCARED (??)" What really gets me is that they were ripping fans off to the tune of $4.98 apiece! "Not to be used for eavil purposes?" Yeah right! Do you know how much GAS $4.98 would have bought you in 1980? Oh, and...why does it appear to be snaowing in outer space?
Posted by Booksteve at 8:55 AM