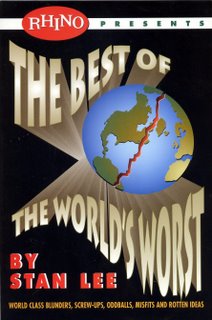 What did Stan Lee do for a hobby before he started doing all of those movie cameos (I can understand Spidey and FF but PRINCESS DIARIES 2? Where did THAT one come from?)? Answer: he wrote books! Or…did he? To look at this cover for RHINO PRESENTS THE BEST OF THE WORLD’S WORST, published in 1994, one would get the definite impression that Stan the Man was the author, wouldn’t one? The fact that the copyright is held by Stan Lee would seem to cinch that but then, if you read the fine print on the acknowledgments page you’ve got a compiler, editors and a list of "researchers, helpers, typists and exotic dancers." The most telling phrase is one that says "featuring caustic comments capriciously choreographed and concocted by Stan Lee." Hmmm… Opposite this page is the title page which now calls the book, STAN LEE PRESENTS THE BEST OF THE WORLD’S WORST and is followed by a quote stating, "If you steal from one author, it’s plagiarism. If you steal from many, it’s research." What th’??? "Steal?" Are they trying to subtly tell us what becomes obvious as soon as you start the body of the book—that Stan’s contributions are minimal at best. Each page offers a number of paragraphs (some illustrated by various artists including sometime Marvel folks, Jim Owsley and Ed Hannigan) of trivial interest and under each one is

an italicized Jay Leno-style zinger from the man who would later bring you STRIPPERELLA. Since he has to come up with something for every single piece, most of them fall flatter than Mister Fantastic after a bad day. For instance, after a piece about a Spanish Church that collapsed after taking 90 years to build, Stan writes, "They shouldn’t have rushed the job." After a piece on the Guyana Tragedy, Stan writes "Odd. We thought they’d died of old age." To be fair, some are better but none bring out a real chuckle. Rhino Records was responsible for this book…which readily explains why they’re Rhino RECORDS and not Rhino BOOKS!
Posted by Booksteve at 6:55 AM