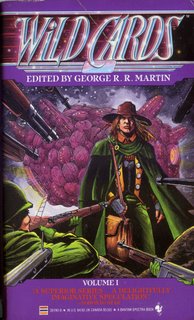 Future bestselling fantasy author George R. R. Martin was involved with the BEAUTY AND THE BEAST television series in 1988 (or was it ’89?) when he appeared at the San Diego Con, unfortunately conflicting with what was billed as "An Afternoon of Hellfire and Brimstone with Harlan Ellison." Only one thing could make me pass that up and that one thing was WILD CARDS. WILD CARDS was a then-new book series which postulated a world in which comic book-style super heroes were real. A virus from space (dubbed the Wild Card Virus since you never knew what you would get) landed on Earth and caused mutations. Some people were killed—melted, bones turned brittle, etc. Others were given weird abilities by the virus and chose to use them to their own ends, These were called jokers. Still others chose to use newfound powers and abilities for good. They were called Aces. WILD CARDS was done as a series of interconnecting short stories by different authors including Martin, Roger Zelazny and a number of newer writers. Eventually, Martin developed the format of what was called the "mosaic novel" in which the characters appeared no longer in separate stories but simply in individual sections of a single, book-length narrative.
Jetboy was already a hero on Earth when Dr. Tachyon arrives. 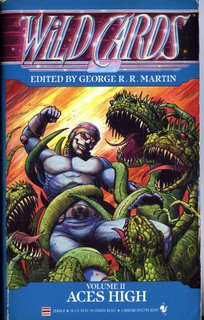 Other characters include the Great and Powerful Turtle, the Sleeper, Kid Dinosaur, Chrysalis and Fortunato. That day in San Diego, only a handful of us came to hear George R. R. Martin so he eschewed the stage and we all simply sat around in chairs in front of it talking…mostly about WILD CARDS. The series, like many things, outstayed its welcome but the early volumes were terrific. Marvel did a graphic novel series that went nowhere some time back and, with the author’s current bestselling popularity, some of the early WILD CARDS volumes were re-released in trade paperback just a couple years back. I eventually sold my original copies but today I picked up later printings of the first two volumes at a library used book sale. These contain nifty Tim Truman covers and as I read once again of Jetboy this evening, I recalled how much I enjoyed these books two decades ago. Thanks, George.
Posted by Booksteve at 11:19 PM