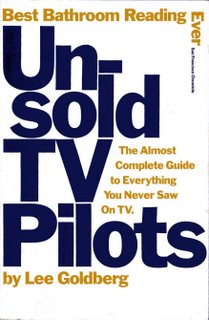 Lee Goldberg’s UNSOLD TV PILOTS, published by Citadel Press in 1991 is actually an abridged version of his similarly titled small press book often found in the reference sections of libraries. Besides research, though, either version can be just plain fun to read as the author describes scores of the most bizarre concepts ever greenlighted. Many of these shows aired as TV movies or episodes of already existing series. Others never aired at all. Some prime examples of actual unsold series included are:
THE RETURN OF THE ORIGINAL YELLOW TORNADO- 1967-Mickey Rooney and Eddie Mayhoff as retired super-heroes. This was written by Jack Benny’s former writing team!
GOOD AGAINST EVIL-1977- the late Dack Rambo starred as a writer who falls for…wait for it…Satan’s girlfriend, then teams up with an exorcist to get her back, righting wrongs and solving crimes along their way.
HIGH RISK-1976-Victor Buono, BATMAN’s King Tut and Joanna (ISIS) Cameron as two of a group of circus performers who use their skills to solve crimes.
ALIAS SHERLOCK HOLMES-1976- Larry (JR) Hagman as a delusional motorcycle cop who thinks he’s the world’s greatest detective and, with the help of his female psychiatrist, conveniently named Dr. Watson, solves crimes.
SHOOTING STARS-1983-Parker Stevenson and Billy Dee Williams (Lando!) as two former TV detectives who become detectives in real life and…you guessed it, solve crimes.
VAMPIRE-1979-Created by HILL STREET BLUES’ Steven Bochco and directed by Bridget (HERE COME THE BRIDES) Hanley’s ex-husband, E.W. Swackhammer, this was the story of a guy (THE EXORCIST’S Jason Miller) who ticks off a vampire (Richard Lynch) and teams up with a retired cop (E.G. Marshall) to stop him…no doubt solving crimes as they do so. A good cast included Barrie Youngfellow, Jessica Walter and Michael Tucker.
BUNGLE ABBEY-1981-Lucille Ball and her husband Gary Morton produced this as a vehicle for her long time co-star Gale Gordon as an Abbott. His "Costellos" included Monks Gino Gonforti, Graham Jarvis and Charlie Callas. As far as I know, they didn’t solve crimes.
YAZOO-1984-William (CANNON, NERO WOLFE) Conrad was legendarily dissed when his hit radio series GUNSMOKE came to television and the CBS brass decided that the portly actor didn’t "look the part." Strange then that somebody somewhere felt the actor WAS right for this series that found his character, a widowed journalist, learning about life in a magical land populated by puppets! (Wonder if they had any crimes to solve?)
WHERE"S EVERETT?-1966- Very early Alan Alda as a man who finds an invisible alien baby on his doorstep one morning. Needless to say, he and his wife decide to adopt and hilarity ensues. Just keeping up with an invisible baby, alien or not, left him little time to solve any crimes even if he wanted to!
SAFARI-1962-Dick Powell produced this AFRICAN QUEEN remake that would have found James Coburn and Glynis Johns having adventures and …aww, YOU know…every week.
THE SUNSHINE BOYS-1977-Red Buttons and Lionel (HART TO HART) Stander as Neil Simon’s "geriatric odd couple" here forced into becoming roommates.
HIGHER GROUND-1988- Singer John Denver as a former FBI agent who avenges his partner and vows to continue to solve crimes in Alaska!
SAVAGE-1973-The producers of COLUMBO brought their boy wonder director Steven Spielberg to this pilot featuring long-time couple Martin Landau and Barbara Bain as an investigative TV reporter and his producer solving political crimes.
OUT OF THE BLUE-1968- Academy award winning actress and future Partridge Shirley Jones is, along with the great Carl Ballantine and several others, an alien visiting our planet to see if they’d like to settle here. Hmmm… probably too much crime.
Posted by Booksteve at 5:38 PM