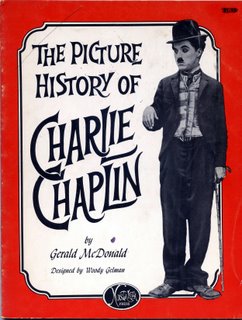 Woody Gelman’s Nostalgia Press appeared in the mid-sixties, presaging the nostalgia boom that I mention so often around here. In 1965, one of the company’s early publications was Gerald McDonald’s THE PICTURE HISTORY OF CHARLIE CHAPLIN, seen here. Along with the requisite stills and film clips, this thin, almost magazine-sized volume presented vintage advertisements and comic strips dealing with the almost unbelievable popularity of the Little Tramp character.
I never really "got" Charlie Chaplin. As a youngster, I reportedly 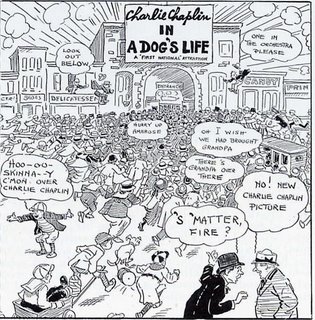 adored Chaplin shorts that were mixed in with the Three Stooges comedies I watched every night but, from what I’ve read recently, it’s possible that it wasn’t even Chaplin. Reportedly, the Stooges package aired on many local stations with Columbia silent shorts, some of which featured may have featured one of the many Chaplin impersonators! My parents said it was Chaplin I loved but then, when I grew older and watched Charlie I found myself as silent as the films. 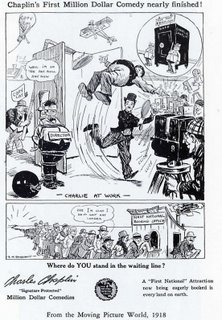 I just didn’t laugh. I admired his skill as a filmmaker and his clever setups and set pieces but I did not laugh. I appreciated the grace with which he moved 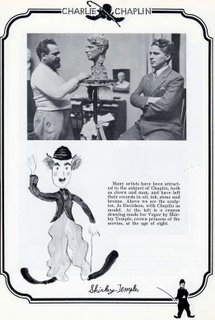 and the pantomime he effected but I didn’t laugh. I laughed out loud at Keaton, I snickered at Lloyd’s double-takes and I even chuckled from time to time at Harry Langdon but Chaplin, to me,was much more clever than funny (much like SCTV). Over the years, I’ve become fascinated by the man himself-- his loves, politics and indiscretions-- and I’ve amassed several of the scores of the published biographies and picture histories but this one, purchased used around 1990, is a favorite—simple, elegant and, as the publisher’s name implies…nostalgic.
Posted by Booksteve at 11:21 PM