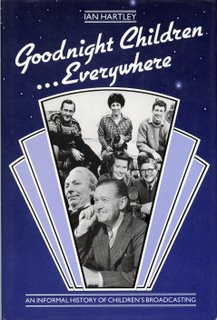 My first exposure to British television was probably Gerry Anderson’s FIREBALL XL-5 back when I was five years old. The US imported quite a few shows from the UK back in the day and I became enamored of THE AVENGERS, THE PRISONER and even DOCTOR IN THE HOUSE. Cliff Richard and the St. Trinians girls turned up regularly on the UHF channels in old movies and staid old PBS (or NET at the time) offered more highbrow fare on MASTERPIECE THEATRE. Eventually they picked up britcoms such as Pauline Collins in NO, HONESTLY! before finally presenting DOCTOR WHO, RED DWARF and MYSTERY! One of my favorite British programmes of late has been LIFE ON MARS.
That said, in spite of starting out with kids’ shows, I knew virtually nothing about the history of UK TV for kids when I ran across Ian Hartley’s 1983 GOODNIGHT CHILDREN…EVERYWHERE at a used bookstore in the early nineties. I was intrigued by the appearance of William Hartnell’s DOCTOR WHO on the cover and purchased it immediately.
The book does a splendid job of capturing the early radio and television world of British children, detailing not only the shows that they listened to but also their reactions to them. One mother wrote the BBC to ask that they not have the sounds of horses’ hooves at the end of a radio show as her daughter became afraid that the horses were about to gallop out of the box! Early, simplistic television shows are given equal time with the sixties puppet shows and even US imports such as THE LONE RANGER and TOP CAT (called BOSS CAT in the UK due to a conflict with the brand name of a cat food.) Familiar personalities are profiled as if they were old friends.
One has to presume that these are the shows and stars that the Beatles and the rest of the British Invasion groups watched and listened to growing up. These are the shows that influenced the people who most influenced pop culture in the sixties.
I didn’t live in this world of Daphne Oxenford, Mr. Pastry and BLUE PETER and reading about it is, in a way, like reading the history of an alternate universe. If you have even a trace of Anglophile in you, however, it’s a most imaginative and wondrous universe! It makes me wish I HAD lived it.
Posted by Booksteve at 8:51 AM