No real story here. Just that that 007 piece 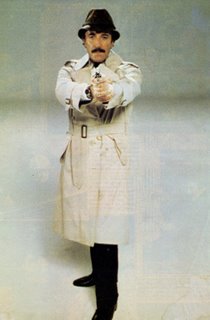 yesterday reminded me of this great still of the late Peter Sellers as Inspector Clouseau in the classic James Bond intro stance. When you consider that Sellers was one of several actors who played Bond (or a variation thereof) in the 1967 parody version of CASINO ROYALE and that now three actors have appeared in films as Clouseau, making it also a Bond-like franchise...well, I just thought it was kind of ironic, amusing and interesting, okay? Come to think of it, sometime superspy Roger Moore also appeared as Clouseau in the dreadful grave-robbing Pink Panther movie, THE TRAIL OF THE PINK PANTHER. I guess what goes around comes around...and it goes around and around and around and it comes out here.
Posted by Booksteve at 10:32 PM