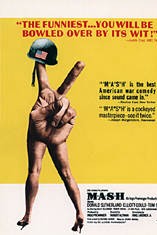 I respect Rober Altman as a filmmaker but the only one of his films that I have ever actually enjoyed is M*A*S*H. I didn’t catch it in its initial run. In fact, I didn’t even watch the TV series until near the end of the first season and it went on to be an all-time favorite. After the series caught fire, the original, R-rated movie was re-released as a PG film in order to cash in on the TV success. I’m uncertain as to whether or not it was edited or if the original rating had just been appealed. The salty language was still there, blood was omnipresent, Hot Lips 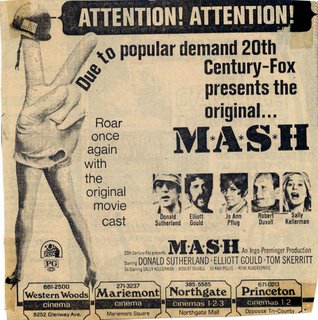 was still naked, etc. If anything was cut, it clearly wasn’t much. Anyway, the original poster with the legs and the hand and the peace sign is undoubtedly one of the most memorable film poster images of them all. How many, however, recall that when it was re-issued in the mid-seventies the hand was now wearing a glove? Huh? What did that signify exactly? This prophylactic protection seemed designed to indicate that, contrary to all that skin shown on the original, the movie was, in fact, safe for the TV fans. Anyone who’s seen the TV version and the film version, however (or read the books for that matter) will tell you that each M*A*S*H must be taken on its own terms. You really can’t read M*A*S*H GOES TO MAINE and successfully visualize either Donald Sutherland or Alan Alda as Hawkeye. Neither can you imagine the movie’s anarchist doctors preaching the series’ left-wing philosophies. Both versions, as well as the long series of books by creator "Richard Hooker," are legitimate. Underneath the humor, they all make you think about the horrors of war and that glove certainly doesn’t make those thoughts any safer.
Posted by Booksteve at 9:46 AM