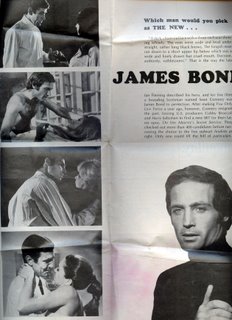 The trailer for the new James Bond thriller, CASINO ROYALE, went on line this week ('Casino Royale' Exclusive Trailer Premiere - Moviefone) and I’m sorry to say I was not particularly impressed. If Timothy Dalton was a Sean Connery type and the more polished, self-effacing charm of 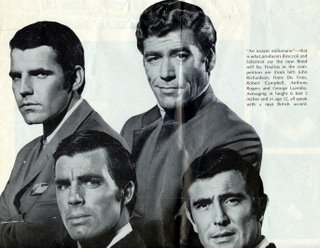 Pierce Brosnan echoed Roger Moore’s 007, then Daniel Craig may well be the new George Lazenby.
Let’s go back to October of 1968 when LIFE Magazine presented the finalists of the first "New Bond" sweepstakes and then announced Lazenby as the winner. It’s fascinating to see actual moments from these gentlemen’s screen tests. Of the bunch, De Vries and Rogers had both played monsters on DOCTOR WHO 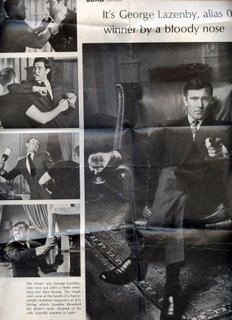 and Richardson, with a fake beard, appeared opposite Raquel Welch in Hammer’s ONE MILLION YEARS, BC a couple years earlier. He was probably the favorite or at least thought so.
George Lazenby, an Australian model, got the role and did a passable job in what many fans say they would consider perhaps the best Bond of them all if only Connery had done it. 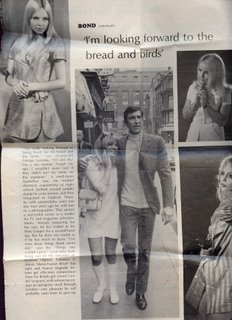 Although he claims in the piece to be looking forward to the hoopla, it didn’t last long for him as this was his only starring film. Connery returned for one more Bond and then the role was recast with former SAINT Roger Moore. Lazenby would turn up in odd places over the years including in a fun cameo as essentially James Bond in the TV movie, THE RETURN OF THE MAN FROM U.N.C.L.E. and in several appearances as the main character’s father in the series THE PRETENDER. It’s a shame he doesn’t work more often because he seems a much better actor now.
Posted by Booksteve at 12:33 PM