A History of the Beatles 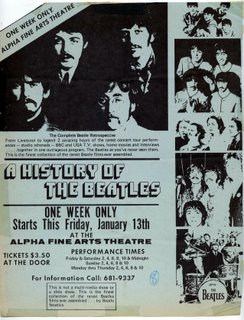 Today’s feature is another that could have fit under the Movies That Fell Through the Cracks banner except that
a) it isn’t really a movie and
b) every bit of the footage is easily accessible on the Internet.
A HISTORY OF THE BEATLES was a more-or-less random compilation of rare footage of the Fab Four that played the Alpha Fine Arts Theater in Cincinnati in early 1978. For all I know, it may well have been compiled locally and that may well have been the ONLY place it played.
Note that the flyer emphasizes that this is NOT a multimedia performance or a slide show. Throughout the seventies, various travelling shows attempted to cash in on the Beatles with exactly those tactics, to varying success. BEATLEMANIA ( "NOT the Beatles but an incredible simulation!")continued well into the eighties, in fact, when I finally saw it. I liked it. Clearly a lot of work went into it and there was a live group on stage performing Beatle songs (in various period costumes) to an overwhelming backdrop of historical context footage, sight and sound. Casual fans loved it but many hardcore fans decried the stage shows. Thus, to appeal to those fans, they distanced themselves with the disclaimer for A HISTORY OF THE BEATLES.
The Alpha Fine Arts had been (without the "Fine Arts" tag) a notorious porno theater that, as you might guess in Cincinnati, was constantly in trouble for one thing or another in the seventies. In the late seventies, it underwent a complete rehabilitation and became a repertory cinema. Their colorful monthly calendars were filled with such fare as SIDDHARTHA, BARBARELLA, THE BICYCLE THIEF and M. HULOT’S HOLIDAY. I had to take two buses to get there (age 19. I didn’t drive until 32 but that’s another story) but I would try to make it every Sunday afternoon.
The footage found in A HISTORY OF THE BEATLES included the STRAWBERRY FIELDS FOREVER video (with Dick Clark outro), REVOLUTION on DAVID FROST, early concert clips, ALL YOU NEED IS LOVE and…well, I’m not sure. You see, one of the first pre-recorded videos I purchased when I bought my beloved Betamax two years later was a two tape set of the same stuff…with about four hours added on! I get confused as to which footage was actually on display at the Alpha. The tape included the full Shea Stadium TV special, the full Tokyo concert and the full MAGICAL MYSTERY TOUR and I’m sure THOSE weren’t a part of HISTORY.
Anyway, for a Beatles fan like myself, that showing I attended at the Alpha Fine Arts 28 years ago now was an overload of new to me musical joy. Yeah, yeah, yeah indeed!
Posted by Booksteve at 7:05 AM