Movies That Fell Through the Cracks # 7 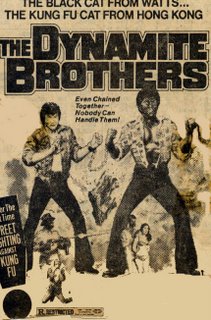 THE DYNAMITE BROTHERS was a no budget 1974 martial arts/blaxploitation film from no talent exploitation movie legend Al Adamson (DRACULA VS. FRANKENSTEIN, BLAZING STEWARDESSES). "See for the first time street fighting against kung-fu!" promised the ads that showed the film’s leads chained together like it was a latter day remake of the classic THE DEFIANT ONES. Like most films of this type, it promised more than it delivered.
The lead role of Stud Brown (which became the title of the eventual VHS release) was played by Timothy Brown. Brown was a pro football player for Philadelphia for most of the sixties but then, like Jim Brown, Fred Williamson and later O.J. Simpson, opted for an acting career. A small role in the film version of M*A*S*H led to his taking on Williamson’s role of the unfortunately named "Spearchucker" Jones in early episodes of the TV series version. The controversial token black character was written out of the series pretty quickly which apparently freed up Brown for THE DYNAMITE BROTHERS.
The martial arts half of the team was Alan Tang, a second string Asian star/stuntman. The supporting cast included prolific Asian-American actor James Hong and Hollywood veteran Aldo Ray. Ray, sadly suffering from various addictions in the seventies, turned up in everything from a straight role in the porn western SWEET SAVAGE to FRANKENSTEIN’S GREAT AUNT TILLIE! (I recall a late interview in which Aldo claimed to have beaten his addictions and enjoyed a bit of a career revival.)
Timothy Brown has continued an ocassional acting career ever since. Al Adamson was murdered in 1995. I shall attempt to avoid the obvious tasteless joke that it was undoubtedly by someone who had seen his films. OOPS! Sorry.
Posted by Booksteve at 10:02 AM