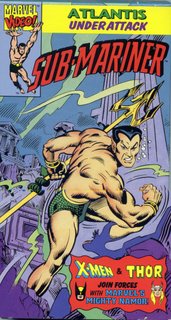 The thing that gets me is that somebody somewhere really must have thought it was a good idea: take actual comic book panels and animate mouths and legs and then use tricky camera work to make them look as though they’re moving. Somehow, they rationalized calling the weird result a cartoon and then somebody actually sold Marvel Comics on the idea. Thus was born the MARVEL SUPER HEROES TV series that was highly touted in 1966 Marvels but, being syndicated, didn’t reach my neck of the river until 1969. Being 10 and a big Marvel fan at that point, I, of course, loved it! The theme songs were kitschy and catchy at the same time and the voice work (mostly Canadian) was quite good. Looking at the so-called animated series today, however, is a nostalgic but cringe-worthy experience.
The series consisted of short segments of CAPTAIN AMERICA, IRON MAN, THOR, THE HULK and THE SUB-MARINER. Every single one of the episodes was taken directly from the original comic books with, I believe, just one single exception. One of the Subby episodes was taken from a FANTASTIC FOUR annual and combined two stories, one of which didn’t even have Prince Namor! Since the producers did NOT have rights to the FF (Hanna-Barbera was already starting on their Saturday morning network series), they had to completely write out the main characters and actually provide some NEW (if extremely poor) animation for these.
The book in question was FF Annual # 3, the wedding issue, and the two stories were the wedding itself and the reprint of FANTASTIC FOUR # 6 in which the Sub-Mariner first teamed up with Doctor Doom. Somehow they DID have the rights to Doom. In the mangled and re-written plot, partially told by the Ted Knight-like announcer (Bernard Cowan) and partially narrated by the great character actor John Vernon as Namor, Doom decided to take over the world. Since many of his enemies, specifically the "Allies for Peace" (also called the "Alliance for Peace") will be at the dedication of the new Peace Building (actually the Baxter Building), he calls forth a horde of hypnotized villains to confront them there.
From this point we get a rehash of much of the fight scenes from the Annual as Professor X calls the original X-Men to tackle the Mole man, Thor battles the Super-Skrull, and other heroes and villains are briefly glimpsed (including what appears to be a semi-naked Electro!). Later, we see Quicksilver in what must have been his summer outfit with a blue short sleeved shirt and red shorts and boots. Sigh. Even Captain America appears for two seconds of a static crowd shot. 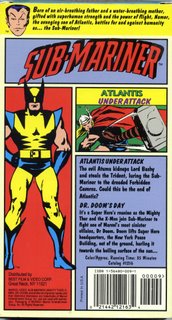 This being technically a Sub-Mariner story, Dr. Doom eventually says (oddly after the bad guys are defeated) "The battle is not yet won. There’s still the Sub-Mariner." He then tricks Namor into a meeting to show him his "Grabber." Don’t go there…please. He even gets our hero to place one in the basement of the Peace Building for some nebulous reason before going upstairs to talk to the tuxedo-clad Professor X. The evil villain checks monitors in the building and we even see a "4" symbol that someone accidentally threw in. Doom then uses his ultra-powerful Grabber and pulls the entire building into space where he plans on sending it into the sun.
The announcer tells us that unknown to all, a giant asteroid crashed into a dead sun millions of miles away creating little meteors. Subby must have heard about this somehow (Aqua-hearing?) because he decides to use the oncoming meteor storm to enable him to propel himself to Doom’s space plane and stop him. Eschewing the helmet he wore in the original issue, Sub-Mariner leaps outside the building, bouncing off the falling rocks until he reaches his goal and saves the day which, of course, means that the Peace building will settle slowly and neatly back to earth into its original location and somehow re-attach all of its plumbing, wiring, etc. Sigh. We were all sooooo naïve then.
Released on video in 1991 along with an Attuma episode from TALES TO ASTONISH, the box touts the appearance of Wolverine both on the front and the back!Perhaps to justify that cover, Logan does appear in a modern ad before the show itself begins Needless to say, in the episode all we get is the ultra-cheaply animated Cyclops, Marvel Girl, Angel, Beast and an absolutely ridiculous-looking Iceman! Historically speaking, though, this was the very first appearance of Marvel’s now oft-animated franchise! It just wasn’t really a Sub-Mariner story!
Posted by Booksteve at 7:04 AM