My First ADVENTURE in Print

I sent my very first letter to a comic book in 1966. It was mailed to GREEN LANTERN and it had been dictated to my mother as handwriting was still, at age 7, a practiced art. I dutifuly bought all of the subsequent issues looking for my letter but to no avail. Letters to SUPERBOY and a few other DC comics also went unpublished. Finally, though, in the late summer of 1968, a pivotal year by anyone’s definition, my very first letter was printed in ADVENTURE COMICS number 374.

According to my memory, I had written a long, in-depth missive regarding the nuances in characterization and continuity seen in the new eleven page LEGION OF SUPER-HEROES story in issue 371. Someone—most likely Assistant Editor E. Nelson Bridwell, apparently slashed it down to the few lines seen here. Either that or this really was all I wrote and I had forgotten by the time it was printed. 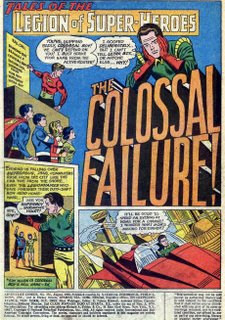 Hey, I was nine by that point, okay? Whaddaya want? Irene Vartonoff? TM Maple? Even Bob Rozakis had to start somewhere!
Re-reading issue 371 today, it is quite a good one, breaking the mold in a number of ways. After being sent back to the Legion Training Academy, Colossal Boy is blackmailed by criminals into stealing Legion secrets. Bouncing Boy, now a trainer there, catches him and in a subsequent trial, he is expelled by newly chosen leader Ultra Boy. Since more than half of the book is filled out with a reprint (which also inexplicably gets the cover!), I’d presume someone had a problem with the "Dreaded Deadline Doom," perhaps artist Curt Swan or inker Jack Abel (whose ultra clean inks had been seen on SUPERMAN at that time, also). I can’t get through to GCD right now but I’d guess the story was by Jim Shooter, boy wonder comics writer. Shooter’s stories were often characterized by their non-standard (for DC) ways of looking at characters. The story itself concluded in the following issue’s book-lengther in which Timber Wolf and Chemical King (a new character but one whose fate was already known from the infamous "Adult Legion" issues) are inducted and we see the return of Legion traitor Nemesis Kid (as well as the young Lightning Lord).
Now that you’ve seen my earliest published work, don’t forget to order your copy of my most recent, THE DUFFY’S TAVERN MATTER found in Jim Harmon’s IT’S THAT TIME AGAIN 3. Order your copy today from Amazon, B&N or directly from http://bearmanormedia.bizland.com/ Tell ‘em Booksteve sent ya!
Posted by Booksteve at 8:28 PM