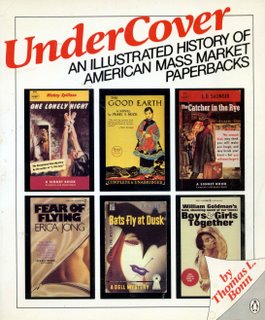 Maybe it’s just the fact that I managed bookstores for literally half my life but this book, UNDERCOVER-AN ILLUSTRATED HISTORY OF MASS MARKET PAPERBACKS, has long been a favorite of mine. Published in 1982, I didn’t find it until about ten years later. Ironically, it was published by Penguin, most of whose small paperback output continued to be considered trades rather than mass markets long past the point where that distinction made sense to anyone. The author, Thomas Bonn, starts out with a nice, reasonably succinct history of paperback publishing. Then, knowing full well that you can't judge a book by its cover and yet how else can you judge it until you've read it, he goes on to detail the always entertaining ways of marketing the books via their garish covers and other hype. There are lots of examples of classic, collectible and just plain weird covers (such as those seen here), 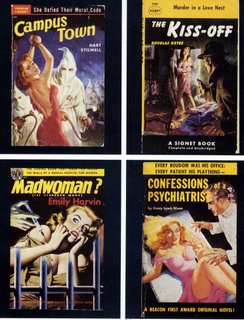 many in black and white but with three separate color sections. If you’re a collector, a reader or especially a longtime bookstore employee, you need to find this long out of print book, one of only two I’ve ever even seen on this particular subject (the other of which I passed on, even at a quarter used at a library book sale so that should give you an idea how unimpressed I was!). 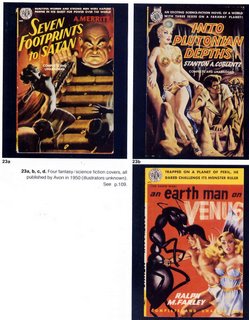