Kristine DeBell & The Wizard of Ozz 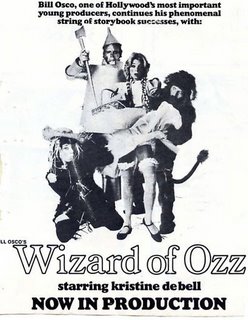 This one may actually have fallen through the cracks before it even got made but clearly some costume shots were done and it was being advertised in the trades. Ozzy Osbourne had nothing to do with THE WIZARD OF OZZ. Producer Bill Osco (FLESH GORDON) lucked onto a surprise hit in 1976 with a silly, sexy R-rated musical version of ALICE IN WONDERLAND starring Kristine DeBell. For a low budget movie of any kind, the budget was well used. The costumes were good and some of the songs were surprisingly singable (What’s a Nice Girl Like You Doing on a Knight Like This?). In the year before STAR WARS, ALICE made quite a bit of money so, quite naturally, a follow-up was planned. I don’t even recall where this ad came from. The paper’s too slick to be VARIETY but it appears to be just an announcement. Was it really in production? Was any footage actually shot? Was it completed but unreleased? Not a clue. Osco's next released pict 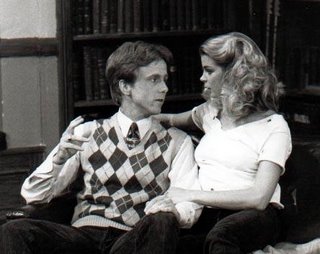 ure, THE GREAT AMERICAN GIRL ROBBERY, was three years later and co-starred DeBell with FLESH's Jason Williams.The charming Miss DeBell turned up that same year opposite Bill Murray in MEATBALLS. One of her biggest roles was as Jackie Chan’s girlfriend in his American movie debut, THE BIG BRAWL. She bounced from there to various high profile gigs including a memorable guest shot as a high profile rock star on TV’s NIGHT COURT. She even got a regular role on THE YOUNG AND THE RESTLESS. Then ALICE IN WONDERLAND was re-released with Kristine’s originally shot hardcore sex scenes badly re-inserted (and quite frankly making for a lesser film). Whether or not that was what caused it, her career sadly faded and she became a trivia question. Neither fish nor fowl. Mainstream star? Adult star? Nope. Just sadly faded. This ad for THE WIZARD OF OZZ may be all anyone ever saw of what would have been her second starring role.
Posted by Booksteve at 7:04 AM