Movies That Fell Through the Cracks # 4

As a film buff since childhood, I long ago developed an affinity for foreign (ie: non-American) films from Eisenstein to Truffaut to Wim Wenders. In 1973, one of my favorite foreign films was LE AMAZONNI - DONNE D'AMORE DIGUERRA aka BATTLE OF THE AMAZONS. It was an R-rated picture and I had to choose what R-rated pictures I wanted to see carefully as this usually involved getting one or more of my parents to take my fourteen year old self to the "under seventeen not admitted without parent" showing. (Okay, Okay! I know there were ways around that but hey, I was an honest kid!) My criteria generally included A) the likely overall entertainment value of the movie and B) the expected amount of large naked breasts that would be on view. I found myself often surprised by the former and generally disappointed in the latter. Through trial and error, however, I quickly learned that foreign films were almost always a good bet for naked ladies!
BATTLE OF THE AMAZONS wasn’t really all that far removed from one of those Italian "Hercules" movies that saturated the market in the early sixties wake of Steve Reeves. Starring Lincoln Tate as Zeno and Lucretia Love—Look at the ads dummy, I am NOT making that up!--- it features a tribe of largely bare chested warrior women fighting men. I don’t recall anything else about the plot quite frankly. Tate’s IMDB listing says little about him but he seems to have started out on American TV so he may have followed the Eastwood route to "stardom."
To me, the ads were the most fun. Note that the girl in the ad 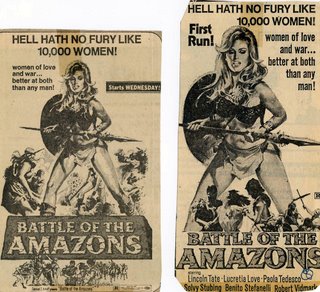 gives a very distinct impression of being…Raquel Welch! It doesn’t exactly look like her but it also looks like no one in this movie and the pose even echoes Welch’s then-recent triumph in ONE MILLION YEARS, BC, of which the fur-wearing black and white poster was still everywhere in those pre-Farrah days. Note also that, in each case, the paste-up department at the local newspaper has worked overtime (with a black magic marker from the look of it)to roughly obscure a bit of cleavage deemed too shocking for the hometown market. In my case, that just underscored the fact that there were probably lots more of those shocking things on view in the movie! I named BATTLE OF THE AMAZONS as one of my top ten movies seen that year…and I haven’t seen it anywhere since.
Posted by Booksteve at 7:09 AM