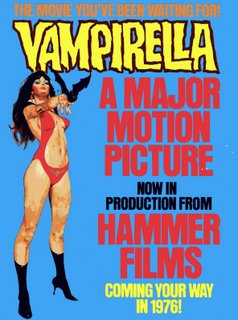 Hammer Films had brought the classic Universal movie monsters back to life in garish (un)living color for a new generation of filmgoers beginning in the late fifties with CURSE OF FRANKENSTEIN and HORROR OF DRACULA. By 1976, however, when it released its final major release, TO THE DEVIL A DAUGHTER with Christopher Lee and Richard Widmark, the studio was on its last legs. A deal with Warren Magazines, whose stories were often inspired by Hammer sensibilities, to film VAMPIRELLA seemed ideal to pull them out of their slump…if only it had come a few years earlier. As it is, this colorful ad (with its umpteenth recycling of THE classic Jose Gonzalez Vampi pose) was all that materialized. At some point, the fan press announced that Playboy model Barbara Leigh had been cast in the lead and somebody, somewhere took a lot of pictures of her in the skimpy costume but I’d be willing to bet it wasn’t Hammer. 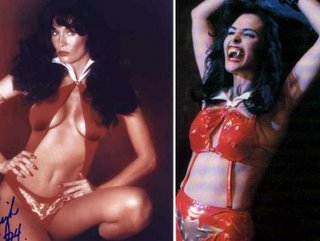 She looked the part to the extreme and, if she could act at all, might have been able to carry a real film of the story of the reluctant alien vampire and her monster-hunting friends. No film emerged, however, for another two decades. Finally, in 1996, ultra-low budget director Jim Wynorski debuted his silly-looking PVC Vampi, ex-Bond girl Talisa Soto, in a film seemingly designed to be derided by fans and fanboys alike (and how Roger Daltrey got mixed up in it is anyone’s guess!).
Hammer films lives on only in histories and documentaries, Vampirella has returned from Harris Comics, Barbara Leigh has milked her moment of fame much longer than seems possible and the 1996 VAMPIRELLA is already largely forgotten. But in 1976…for a brief moment, we dreamed of Drakulon!
Posted by Booksteve at 10:04 PM