Bob Hope Meets Stanley and His Monster (and Scooter) 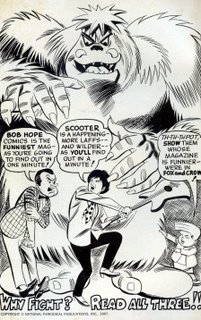 This ad appeared in a few DC comics dated December, 1967 and served as almost a last ditch effort to get fans to read the books being advertised. SWING WITH SCOOTER, although an acceptable ARCHIE variation, was too tied to its mid-sixties origins to avoid seeming dated almost immediately. THE ADVENTURES OF BOB HOPE had been around for years but, in spite of Neal Adams artwork and far-out hero Super-Hip, seemed out of place in the sixties (Hope, himself, is said to have had a whole collection, though). STANLEY AND HIS MONSTER, which we wrote about earlier here, was a personal favorite but even I'll admit that it had gotten kind of crowded pretty quickly what with gnomes and leprechauns and ghosts and Bob Oksner babysitters (hotcha!) and such. They were just about to boot FOX AND CROW out of their own mag at thepoint this ad ran but that wasn't exactly a good thing. Apparently, a lot of folks stopped buying it when Fauntleroy Fox and Crawford Crow finally gave up (pardon the expression) the ghost. Soon enough, Bob, Scooter and Stanley and friends were gone, too.
Posted by Booksteve at 3:26 PM