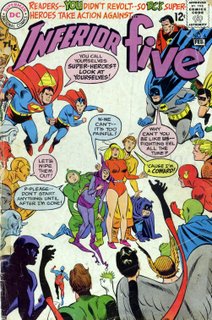 Real or not, thanks to Stan Lee’s editorials and letter pages, sixties comics fans had an idea what things were like in the Marvel Bullpen. DC, then known as National Comics, on the other hand, had kept quiet about that sort of thing, preferring the image of a completely professional corporation. At least they did until late 1967 where, in the unlikely pages of INFERIOR FIVE # 6, we are treated to an exaggerated, but probably factually based, look at what really went on in the DC Bullpen!
INFERIOR FIVE was a superhero parody featuring Merryman (a Woody Allen type), Awkwardman, The Blimp, the cowardly White Feather and the pulchritudinous Dumb Bunny. This issue, however, opened with Merryman promising a brief prologue about how an IF comic book is made. That prologue then takes up the entire issue. Filled with dozens of in-jokes and parodies of comics creators, this story, entitled "How to Make a Bomb!" is actually one of the funniest DC comics ever published.
After a completely misleading cover and an amusing intro featuring 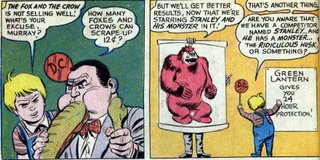 a brief look at Ginny and Lucille, "the switchboard girls," we meet I.D., the Boy Wonder and Big Boss of National Comics. Although a parody of then-publisher Irwin Donenfeld (himself soon to be ousted), since he was the son of National Comics founder Harry Donenfeld, he is portrayed as a five year old. I.D. travels in a private elevator down to a sub-basement clearly based on Jack Benny’s legendary vault to visit his staff. Awkwardman observes from the next panel that, "They’re already at the bottom of page 5 and they haven’t even started this issue!"
Editor Jack Miller is introduced next, being fitted for a suit by seven tiny (and racially cliched) Hong Kong tailors as his secretary begins a day-long phone conversation with her mother that occasionally comments on events in the book. I.D. and Jack head off to an editorial conference (the tailors, too) where less than flattering caricatures of Mort Weisinger, Julie Schwartz, Bob Kanigher and others are having a food fight!
The Boy Wonder tells E. Nelson Bridwell, a former MAD writer, to put more of "that MAD spirit" in INFERIOR FIVE. Bridwell rattles off a full panel of MAD nonsense words like "potrzebie" and "fershlugginer" to which I.D. replies, "I’m dubious but try!" At the bottom of the page, Awkwardman observes that, "This ‘brief prologue’ promises to be longer than THE BIBLE." (Merryman responds with, "And that WAS a long movie!" 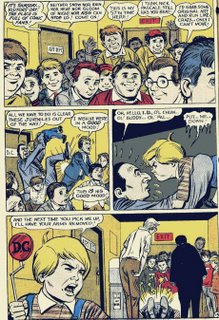 Miller(and his tailors)meet up with this issue’s artist, Mike Sekowsky and they decide to go see Art Director carmine Infantino for a cover conference only to run into a fanboy tour! 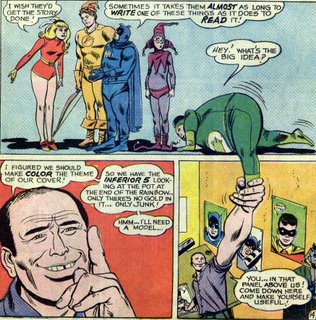 Carmine, when they do find him, breaks the fourth wall to use the Blimp as a model (for a vase!), then it’s off to Sol Harrison and Jack Adler in the Art Department, dueling with ink. The aptly named letterer, Joe Letterese gives a gothic touch to the issue’s text next. Then Miller tells Bridwell that he heard he won an Alley Award (Fandom’s early version of the Eisners) for writing INFERIOR FIVE. Bridwell counters that actually he was beaten up in an alley for writing the mag!
A lisping mad scientist-type shows up to audition for the villain role followed by our actual hapless heroes confronting their creators about using all of the space just as the seven little tailors finally finish the straitjacket they’ve been sewing for Jack Miller and take him away, leaving his secretary to sum up the day as the Inferior Five sack out on the floor in the office. A typical day at National Comics in late 1967? 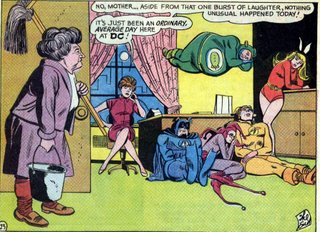 Posted by Booksteve at 9:50 AM