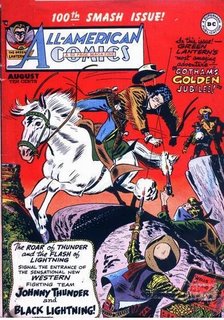 Comics art legend Alex Toth died yesterday. Although he began as an old school DC artist in the forties with Kubert, Infantino and Hasen, Alex Toth's artwork, greatly influenced by newspaper cartoonists like Noel Sickles and Milton Caniff, gradually grew more stylized. His panel layouts were legendary and, especially in later years, his long, hand-lettered and illustrated letters to fans, magazines, columns, etc. were highly prized. Although never associated particularly with one strip, Toth is represented here in the Library in many forms. Seen here is a copy of the second Golden Age comic book I ever purchased. ($5.00 in 1974) Toth had been one of the regular artists on the long-running GREEN LANTERN strip that had been cover-featured on ALL-AMERICAN COMICS for ages. With this particular issue, though, # 100, GL took a back seat that would soon lead to his early retirement as Alex Toth presented the new cover feature, JOHNNY THUNDER! Now, of course, all DC fans know that Johnny Thunder was a JSA member and had his own strip (and his own Thunderbolt!) but this was somebody new--a cowboy! The always popular western genre was about to take over the world of pop culture in the fifties on the new medium of television and the comics were jumping on the bandwagon as early as 1948. Toth's storytelling made this a cut above the rest and in just a couple of months, GREEN LANTERN was phased out completely and the book's title changed to ALL-AMERICAN WESTERN. DC reprinted and revived this JOHNNY THUNDER numerous times over the years as Alex Toth's work has grown in stature. He was one of the greats and his incredible work will continue to be discovered by new generations.
Posted by Booksteve at 7:19 AM