Movies That Fell Through the Cracks # 3 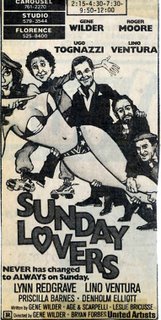 Gene Wilder was a major star (one of my personal favorites!) after YOUNG FRANKENSTEIN in 1974 enabling him to write and direct his own vehicles just like his mentor, Mel Brooks. If he wasn’t as talented as Mel Brooks, what did it really matter? THE ADVENTURE OF SHERLOCK HOLMES’ SMARTER BROTHER and THE WORLD’S GREATEST LOVER were still funnier than most other movies of their day. Around 1980, it looked like Gene could do no wrong. That’s where SUNDAY LOVERS comes in. Actually, I haven’t seen it so I shouldn’t talk that way. Hmmmm….according to my records I have seen it. Was it really that unmemorable? This was one of those combination features so popular in Italy in the sixties. This particular one was a French/Italian/British/US co-production. That kind of warning should NEVER be ignored! Four completely unrelated short sex comedies. Wilder starred in "Skippy," the American thirty minutes. Then-current 007 Roger Moore was in director Bryan Forbes’ UK segment with international favorites Ugo Tognazzi and Lino Ventura rounding out the other two sections. Other than the unusual fact that the Moore segment was written by Anthony Newley’s longtime lyricist Leslie Bricusse there’s not much else to say about this little seen and less remembered sex comedy anthology. Gene Wilder still had a couple of hits in him but this was the start of his career downslide. Too bad.
Posted by Booksteve at 10:34 AM