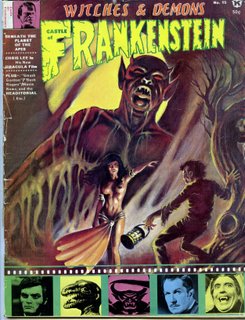 Here’s another one I thought I no longer owned. This was my very first issue of CASTLE OF FRANKENSTEIN, Calvin T. Beck’s erratic pop culture mag of the sixties and seventies. I discovered FAMOUS MONSTERS in 1969 so, naturally, when I saw Vincent Price and Christopher lee, two of my horror favorites, on the cover of this OTHER mag along with DARK SHADOWS’ Quentin Collins, I knew I had to buy this issue! Okay, okay. The semi-nude Frank Brunner sorceress babe on the cover may have been a deciding factor as well.
Having started out, like a dozen other also-rans, as more-or-less a clone of FM, CASTLE OF FRANKENSTEIN quickly expanded to include coverage of comic books, genre fiction, television and other aspects of pop culture. Striving to be a bit more adult than FM, CoF presented actual critical reviews, not just pun-filled looks at monster movies. There was also a tradition of semi-nudity, again giving the impression of maturity while appealing to the fanboy. Thus we see in this issue a reprint of a vintage piece on Lon Chaney’s makeup 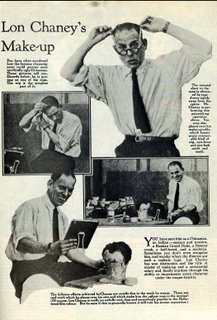 but also a cheesecake photo of Hammer movie starlet Veronica Carlson.
Cover artist Frank Brunner, barely out of his Wrightson-ish phase, gets an early profile and a SMASH GORDON 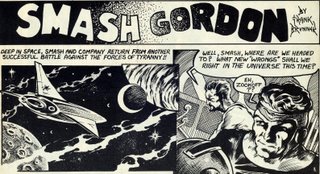 comical strip several years before his Marvel fame. There are features on MAROONED, THE OBLONG BOX, BENEATH 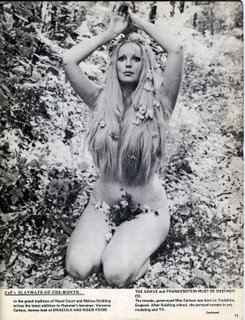 THE PLANET OF THE APES and TASTE THE BLOOD OF DRACULA. There’s also coverage of sci-fi fandom and recent comics releases. There are even two pages of LITTLE NEMO IN SLUMBERLAND reprints…just because! The back cover of this 1970 monster mag features, of all things, the YELLOW SUBMARINE cartoon Beatles. About the only thing CASTLE OF FRANKENSTEIN didn’t cover was a regular publishing schedule. Notorious for poor distribution and the length between issues by the time I discovered it, I picked up only intermittent copies going forward (including, of course, the Linda Blair cover in 1974) but they all offered a fuller view of my interests than just about any other magazine at the time. 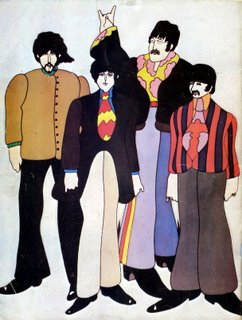 Posted by Booksteve at 7:18 AM