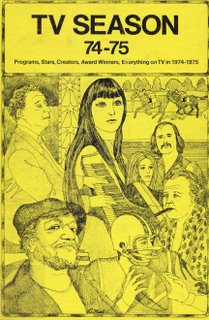 Around 1988, I found the four volumes seen here at a Library used book sale at the Mall in which I worked. They were 50 cents each and turned out to be one of the best buys I ever made. Produced by Nina David for Oryx Press, neither of whom I had ever heard of before, these meticulously indexed alphabetical compilations of every series and special airing in the mid- to late seventies have proven to be invaluable reference works. On a completely different note, they serve as reminders of strange TV series, specials and one-shots that are now nearly totally forgotten thirty years on.
Here are some choice examples-
JOEY AND DAD- a 4 part 1975 summer series featuring sexy (and later much maligned) singer/dancer Joey Heatherton and her father Ray, known on fifties TV as "the Merry Mailman." The show featured SMOTHERS BROTHERS alumnae Pat Paulsen and Bob (Super Dave Osborne) Einstein and had some good music and sketches.

MITZI AND A HUNDRED GUYS- Inexplicably, Mitzi Gaynor used to regularly turn up with less than spectacular TV specials that often won or were nominated for awards. This one from 1975 featured brief appearances by "The Million Dollar Chorus" who included William Shatner, Leonard Nimoy, Andy Griffith, Steve Allen, Bob Hope, Monty Hall and dozens of other unlikely candidates.

THE ZOO GANG- A short-run British series featuring Brian Keith, John Mills, Barry Morse and Lilli Palmer and based on a book by the guy who wrote THE POSEIDON ADVENTURE. Music was by Paul McCartney! 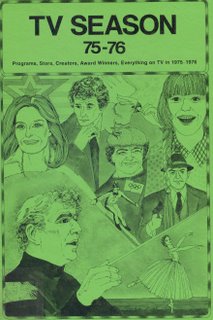 THE GOODIES AND THE BEANSTALK- A 1976 PBS airing of a British satire by the hilarious Python-like comedy troupe that never really caught on in America, hosted by Jeremy Brett (later Sherlock Holmes) and featuring John Cleese.

PBS MOVIE THEATER- a 76-77 series that aired rarely seen film classics that were just eaten up by us budding film buffs! Titles included Cocteau’s BEAUTY AND THE BEAST, THE CABINET OF DR. CALIGARI, IVAN THE TERRIBLE and KIND HEARTS AND CORONETS. 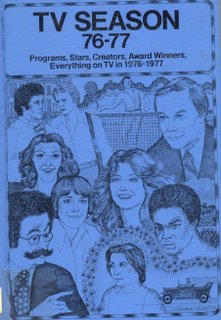 GOOBER AND THE TRUCKER’S PARADISE was a 1978 unsold pilot returning George Lindsey to his familiar Mayberry character, now set in a truck stop café. The delightful Leigh French appeared along with cult actor Brion James. Music was by Ray Stevens.
WHAT’S UP DOC? was another unsold pilot, this time featuring Barry Van Dyke in the Ryan O’Neal role from the movie of the same name opposite Caroline McWilliams, later of BENSON. 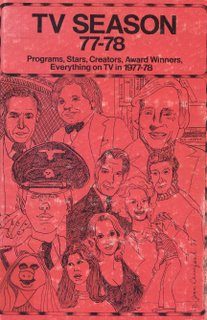 In spite of the professional quality of the interiors, the decidedly amateurish covers tell me that this series was not commercially distributed. Were these the only volumes or had it been published for years? When did it stop? Who was/is Nina David and why isn’t she as well-known as other TV historians such as Vincent Terrace? All of which would be interesting to know but none of which would change the enjoyment and practical use I’ve gotten out of this two dollar purchase!
Posted by Booksteve at 10:15 AM