You Know How You Get a Song Stuck in Your Head? # 1 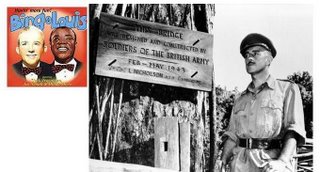 From time to time, everyone gets a song stuck in their head. Sometimes it comes from a few seconds on a TV commercial or in an elevator but more often than not, at least in my case, the songs just spring up from my vast (and largely unexplored) subconscious. My lovely wife, pointing out that she can't imagine anyone having a more eclectic inner soundtrack than mine, suggested that I might on ocassion, share these interior musical moments. So here we are with that first look into my subconscious. The two songs that have been stuck in my head since awakening this morning are "Gone Fishin'" by Bing Crosby and Louis Armstrong and "The Colonel Bogey March" from THE BRIDGE ON THE RIVER KWAI. What's stuck in YOUR head today?
Posted by Booksteve at 9:44 AM