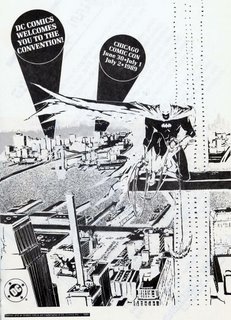 The picture of the Caped Crusader at left was originally printed in the 1989 Chicago Comicon Program Book. It was my second Chicago Con (and a memorable one! At breakfast one morning in the hotel restaurant, I got to watch legendary BATMAN artist Dick Sprang introduce himself to then DC President Jennette Kahn!) That Denys Cowan art always bothered me, though. It was unique, unusual and, in my opinion, somehow just wrong! Now, through the magic of computers, I give you DC and Batman's greeting to the 1989 Chicago Comic Con the way I still feel it was meant to be! My theory is that the artist did it the way it was printed to save on black ink and that it was supposed to be reversed only no one told the printer. 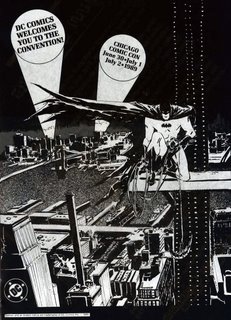