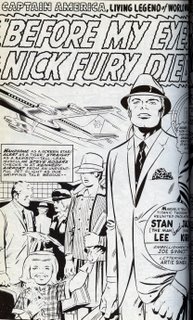 Here's an unexpected one for the Jack Kirby swipe file series in THE JACK KIRBY COLLECTOR(but since I have my own blog, I'm debuting it here) and it's a weird one. One of my all-time favorite splash pages comes from the CAPTAIN AMERICA story in Marvel's TALES OF SUSPENSE 92, 1967. It's a simple piece featuring Steve (CA) Rogers arriving back home at a commercial airport after a long series of very eventful issues. He's smiling, he's optimistic, he's...wait a minute. What's the deal with that scene-stealing little girl holding a doll? She's waving at us like she knows she's in a comic book! In fact, she doesn't look much like a Kirby character at all! I always had the sneaking suspicion that frequent Kirby inker Joe Sinnott threw in a drawing of his daughter or something just for fun. In fact, I vaguely recall an interview where someone asked Sinnott about that panel but I don't recall what he said. Jump now to DC's METAMORPHO 16 which hit the stands just a couple months later and...whadda ya know? There she is again! 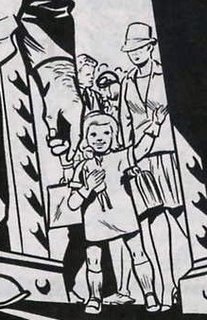 In fact, the entire airport crowd, in approximately their exact same positions, turns up at a dock where a cruise ship is leaving! Credited artist is Sal Trapani but Sal had a reputation for lots of assistants or, quite often, simply farming out or subcontracting the work he had been assigned. 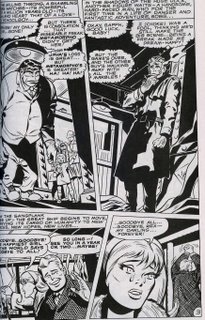 The inks still look to me like the heavy Charles Paris inks that had defined the look of the series but neither DC's SHOWCASE volume nor GCD credits an inker other than, perhaps, Trapani himself. So the question is, who was drawing this scene? Did they need a small crowd scene and just lift it plain and simply from the Cap tale which more than likely was on the stands just as the Element Man story was being drawn? If it was Sinnott's daughter, neice, neighbor or whoever, I wonder if she ever saw herself in THIS one!
Posted by Booksteve at 6:14 AM