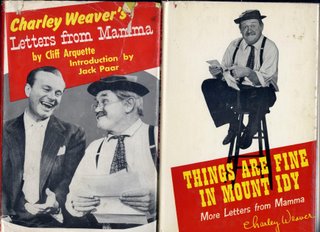 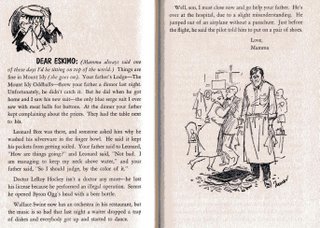 Cliff Arquette is recalled today, if at all, as some distant show business relative of all of those other youngish Arquettes running around on TV and in the movies. There was a time, though, boys and girls, when Cliff Arquette--or rather his alter ego, Charley Weaver--was a star! Arquette had actually already retired from a mildly successful showbiz career when his creation of the easy going country comic, Charley Weaver, turned up on Jack Paar's TONIGHT show in the late fifties. Charley would appear fairly regularly, always offering an amusing letter ostensibly from his "Mamma" back home in the fictitious Mount Idy. 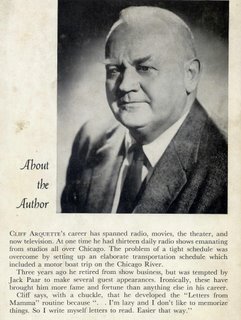 These pun-filled missives were loaded with old jokes, new jokes, clever wordplay and even visual gags and proved to be so popular that there were at least two multi-printing collections of them published! As Paar gave way to Carson, Arquette parlayed his character's popularity into appearances on dozens of TV shows before ending up as a regular on the long-running game show, HOLLYWOOD SQUARES. If host Peter Marshall's book is to be believed, Cliff Arquette was (in one sense) even more successful behind the scenes, filling his days and nights with wine, women and song as he grew older...particularly the women and the wine! The very idea! What would Mamma say?
Posted by Booksteve at 11:21 AM