Movies That Fell Through The Cracks # 2 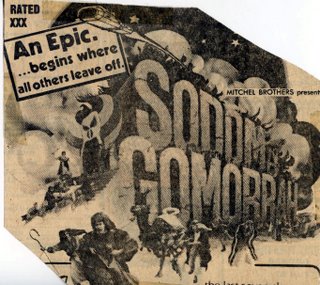 This one's not quite completely forgotten. I found several "collector's" sources for it and at least a little info on IMDB. In 1975, though, SODOM AND GOMORRAH-THE LAST SEVEN DAYS was expected to revolutionize the adult film industry before it flopped big time. At nearly a million dollar budget, it was reportedly a DeMille sized biblical epic with sex. Never having seen it, I can't say for sure but I'd bet part of the reason it flopped was that it also supposedly had comedy( including a talking chimp)...and science fiction! At age 16, never having seen an adult film, that's what appealed to me. There's a freakin' space ship in this ad! This was a period when being an adult filmmaker didn't mean just pointing the camera at couples rutting by the pool. Some of these folks actually aspired to serious low-budget, independent film-making that simply emphasized sex. Heck, the pictures were actually advertised in family newspapers (which is where I clipped this one).The ill-fated Mitchell Brothers (one would later murder the other) had earlier struck gold with BEHIND THE GREEN DOOR, a pretentious, artsy porn film starring Marilyn Chambers and this epic was to be their masterpiece. Million bucks or not, I have a sneaking suspicion that this poster was way better than the picture itself. The spaceship in biblical times was done a few years later by Monty Python in LIFE OF BRIAN. Wonder if they got the idea from this one?
Posted by Booksteve at 6:56 AM