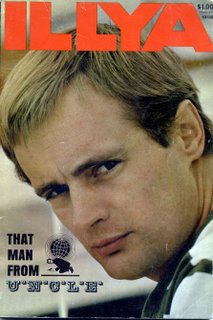 I was watching TV one night a couple weeks back when I found myself interested in the latest CSI clone, NAVY NCIS after catching David McCallum playing a character called Donald "Ducky" Mallard. At one time, the Scottish born actor was the flavor of the month, appearing as mysterious spy Illya Kuryakin opposite Robert Vaughn’s Napoleon Solo weekly in the (sort of) Ian Fleming-created TV series, THE MAN FROM U.N.C.L.E.
Inspired by the success of the earliest 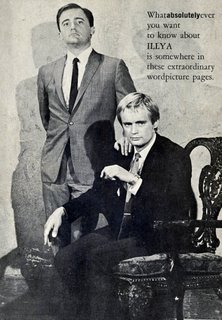 James Bond films, the series started out with semi-serious spy stories but, after BATMAN, veered toward the camp and tongue-in-cheek. Almost from the beginning, McCallum, in the small role of Illya, became a fan favorite. Soon enough, in the manner later followed by Mister Spock and Fonzie, he became THE favorite star of the show! The actor, originally known for several guest shots on THE OUTER LIMITS, did personal appearances and even appeared in character on the sitcom PLEASE DON’T EAT THE DAISIES. In 1966, he even had the book seen here all to himself. Ultimately, the U.N.C.L.E. franchise included novelizations, comic books, toys, games and even the spin-off series, THE GIRL FROM U.N.C.L.E., all of which wore out Illya’s welcome by 1968. 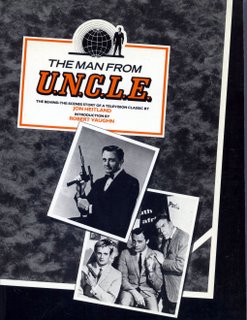 McCallum returned for several less than memorable TV series tries in the US before re-emerging in the late 1970’s in the UK with SAPPHIRE AND STEEL. Like DOCTOR WHO, this was a serial. 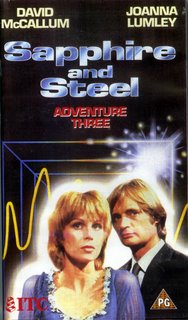 Unlike DOCTOR WHO, it was dreadfully dull and slow in spite of an interesting premise and a post NEW AVENGERS/pre-ABFAB Joanna Lumley. My wife loves the series and it has become a cult favorite in its own right although it never really appeared in the US (Just this year, David Warner essayed the McCallum role in new audio adventures).

David McCallum continued to be a familiar, welcome face on various series between leading roles, even returning to Illya in an U.N.C.L.E. TV reunion movie. In 1989, a well-done behind the scenes book on the original series came out. He may not be a teen idol anymore but, with the rise of the Internet, McCallum’s fan base has a place to gather once again. "Open channel ‘D.’" Here are a couple links to David McCallum sites:David McCallum Updates, David McCallum Fans Online entrance
Posted by Booksteve at 8:50 PM