Movies That Fell Through the Cracks # 5 (and last for now) 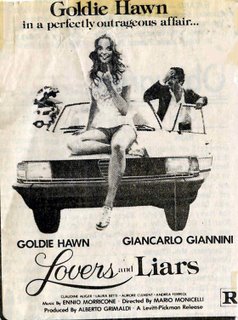 I adore Goldie Hawn. From BUTTERFLIES ARE FREE straight on to THE BANGER SISTERS, she has remained a favorite. I did NOT like her ditzy blonde on ROWAN AND MARTIN’S LAUGH-IN so I didn’t care for her Oscar-winning CACTUS FLOWER as it featured THAT Goldie. One of my absolute favorite films of the seventies is FOUL PLAY, Colin Higgins’ brilliant Hitchcockian comedy featuring Ms. Hawn, Dudley Moore and a great mainstream debut for Chevy Chase (that he never really has been able to live up to since). I also saw PRIVATE BENJAMIN, arguably Goldie’s best film, twice. In between these two popular hit vehicles, however, 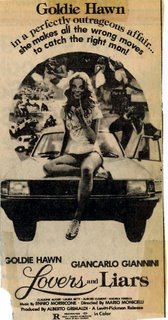 came LOVERS AND LIARS.
LOVERS AND LIARS, or more accurately VIAGGIO CON ANITA (literally Travels With Anita) is a fairly forgotten sex comedy featuring Italian hunk of the moment Giancarlo Giannini. I saw it several years later cut up on local TV. Hopefully, it made at least a bit more sense uncut. Did we even see it uncut in the US? One IMDB review mentions jarring jumpcuts during Goldie’s scenes of passion, the implication being (as I said yesterday) that R rated Italian films from the seventies are safe bets for naked breasts…except when the American censor (or the superstar actress’s agent perhaps) gets to them. I think it’s safe to presume that this was probably shot before FOUL PLAY and released afterwards as her career was in just a bit of a lull during that period. What’s it about? Who remembers? Like I said, it’s a romantic Italian sex farce. For some those are very much an acquired taste. For those that love them—or Goldie Hawn--- I understand that you can sometimes find LOVERS AND LIARS in the video bargain bins of America.
Posted by Booksteve at 12:05 AM