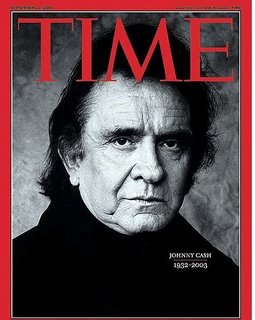 music is the 1970 protest song by Johnny Cash entitled 'What is Truth? "The old man turned off the radio
Said, 'Where did all of the old songs go
Kids sure play funny music these days
They play it in the strangest ways'
Said, 'it looks to me like they've all gone wild
It was peaceful back when I was a child'
Well, man, could it be that the girls and boys
Are trying to be heard above your noise?
And the lonely voice of youth cries 'What is truth?'" This was actually a pretty heavy-handed, talky piece against war and promoting youth values. It was a big hit in 1970 thanks in part to the huge youth appeal of the man in Black's popular ABC television series. THE JOHNNY CASH SHOW somehow managed to promote down home family values and at the same time became, in a way, nearly as subversive as THE SMOTHERS BROTHERS SHOW by continually giving a musical forum to such artists as Bob Dylan, Joni Mitchell, James Taylor, Linda Ronstadt and Stevie Wonder. Eric Clapton's Derek and the Dominos even made a rare TV appearnce with Cash, jamming with legendary show regular Carl Perkins! The post-Tork Monkees even guested, doing schtick and Cash's old minor hit, "Everybody Loves a Nut" with Johnny! I don't think I've actually heard "What is Truth?" more than once since those days. Maybe it's the news headlines that brought it back out of the files in my brain. Seems to apply today as much as it did then. Sigh. What goes around comes around and it goes around and around and around and still comes out here.
Posted by Booksteve at 6:51 AM