Elvis Records in the Seventies 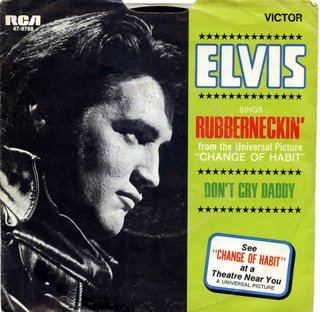 The sixties didn’t really exist for Elvis Presley. Between movie producer Hal Wallis and the ever-present evil of Colonel Parker, Elvis was kept in a drugged stupor through most of the decade…in a manner of speaking. They had latched onto a huge cash cow in Elvis’ movies so the canny pair just kept churning out variations on the theme. Some were more entertaining than others but in all of them, Elvis gave his one note impression of the tough but sensitive singing hero who always got the girl. In between films, he was not allowed to grow up. He was given huge amounts of money and kept pacified with expensive toys, guns, sex 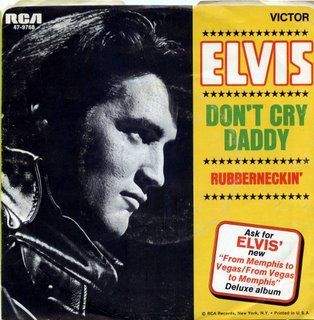 partners and peanut butter and banana sandwiches. One telling moment captured in a posthumous documentary shows Elvis thanking one of his notorious "Memphis Mafia" for 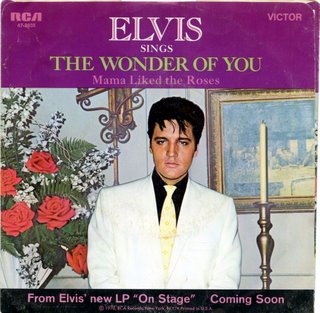 getting him a girl the night before. "That girl last night? She give great head, man!" When informed they were being filmed, he and others around them break into the hymn "What a Friend We Have in Jesus."
A partial clipping from an unknown early seventies magazine that I have in my archives talks about his female entourage. "The membership of this select group may change, but their purpose is to pamper Elvis, to soothe him when he’s tired or tense, to encourage a smile when he’s feeling blue, to give him massages, and generally cater to his needs. In return for their loving attentions to him, Elvis’ girls get the special, sweet, Southern-style treatment he always accords to members of the fair sex, as well as all the pretty clothes, expensive gifts, new hairdos and other nice things in life they could wish. 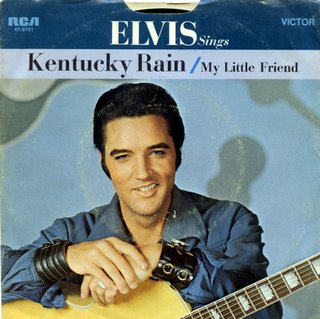 He’s even been known to personally see to the outfitting and coiffuring of a particular favorite, much as if she were a life-size Barbie doll to dress up in beautiful clothes. These girls’ only fear is that—and usually sooner than later— Elvis will tire of them and have a fresh…" That’s where my partial clipping ends but….brrr! Doesn’t that sound as though El had a harem of personal concubines to you?
Anyway, Elvis didn’t have any real chart 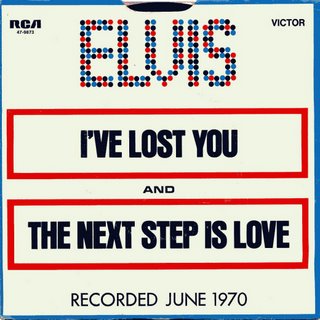 action during the mid-sixties at all, his pioneering music and style taking a backseat to his movie bankability. Then, after his legendary 1968 comeback special, "Suspicious Minds" and "In the Ghetto" were released to great acclaim. There followed a brief return to the top forty with a series of enjoyable, mostly non-movie related singles sung in a variety of (overproduced) styles. "Rubberneckin’" was a fair rocker and one of the few songs in Presley’s legendarily bad last acting film, CHANGE OF HABIT (with Mary Tyler Moore as our hero’s love interest…and a nun!) The flip side was a tearjerker story song, "Don’t Cry Daddy" which ultimately got more airplay. "Kentucky Rain" was a catchy song co-written by future country/pop hitmaker Eddie Rabbit. "I’ve Lost You" wasn’t particularly memorable but "The Next Step Is Love" became a favorite with me and features a great lead vocal (and waaaay too much backing vocals!). "Mama Liked the Roses" and "The Wonder of You" were another double A-side with both getting lots of play at first. The building, pompous show stopping splendour of the latter eventually won out. 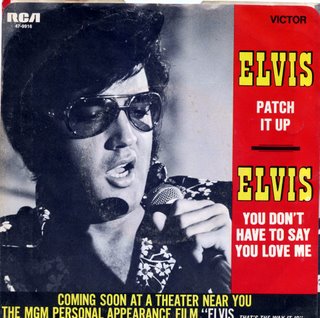 "Patch It Up" and "You Don’t Have to Say You Love Me" were probably past the end of this brief run as neither actually appeared on radio much. Presley continued to turn out singles from this point to ever-diminishing returns until his untimely death in 1977, after which his final release, the less than stellar "Moody Blue" topped the charts for obvious reasons.
What would things have been like if Elvis had been allowed to grow up and live something close to a "real" life? We’ll never know. The boy who changed music forever was himself held back from evolving by being given anything he ever wanted. Eventually everything he ever wanted , along with no one willing to say the word "no" to him, killed him at an age younger than I am now! I think there’s a lesson there somewhere.
Posted by Booksteve at 8:11 AM