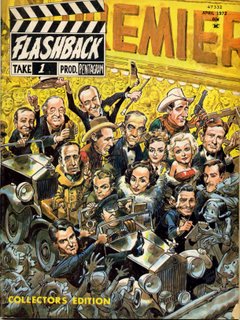 FLASHBACK magazine, published briefly in the early seventies, tried to be to classic regular movies what FAMOUS MONSTERS was to classic monster movies. The problem was that there was no one like Forry Ackerman running the show (young Leonard Maltin would've been perfect!). 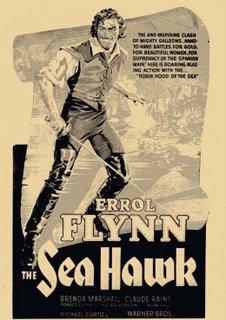 Instead, then, in spite of some good general articles by fine film historians including Alan G. Barbour, what you mainly got was a treasure trove of rare stills and illustrations (including the great "deer in the headlights" shot of Ralph Byrd as Dick Tracy 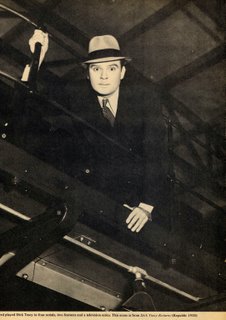 seen here). This was not a bad thing! A highlight of this first issue was also the fact that you had not one but two gang caricatures of Hollywood heavyweights by veteran MAD artists. The front cover offers Jack Davis' crowded premiere night scene and features Cary Grant, Peter Lorre, Sydney Greenstreet, John Wayne, Spencer Tracy, Jean Harlow (who was long dead by the time Greenstreet appeared in a film in real life!),Clark Gable, Errol Flynn, Gary Cooper, Boris Karloff (in a nod to the monster mag crowd?), Jimmy Cagney, Fred Astaire, Bette Davis and Joan Crawford. 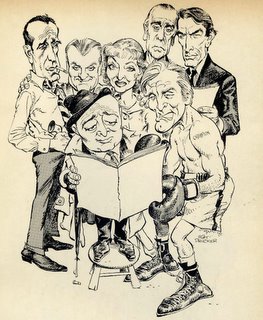 The inside back cover subscription ad offers Mort Drucker's version of the celebs: Bogart, Cagney, Davis, Karloff and Lorre joined this time by Kirk Douglas and Gregory Peck. Still, the nostalgia boom peaked fairly quickly and FLASHBACK didn't last long on the newsstands.
Posted by Booksteve at 4:46 PM