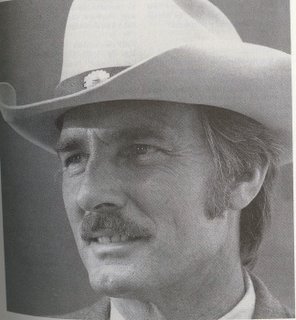 I would be remiss if I didn't note the passing of Dennis Weaver. A fine actor, popular TV star, humanitarian and noted ecologist, I will remember him best as the star of one of my all-time favorite television series, McCLOUD. Not an ordinary TV series, McCLOUD began life as a variation on the popular Clint Eastwood film, COOGAN'S BLUFF, about a Southwestern lawman who doesn't fit into the big city when he goes to pick up a prisoner. In Sam McCloud's case, the character was in New York City to "study police methods." Okay, that's the ONE unlikely thing the producers asked you to accept. After that, it all fell into place. Sam was the easygoing, troublemaking lawman who clashed with his chief (the late, great J.D. Cannon as Chief Peter B. Clifford) as he stumbled his way through cases and clever plots inevitably teaching the NYC police more than they ever taught him. Originally a one hour series on a rotating show entitled FOUR-IN-ONE, the cowboy cop soon joined COLUMBO and McMILLAN AND WIFE as the mainstays of the NBC MYSTERY MOVIE, expanding in the process to 90 minutes and even, from time to time, two full hours per episode! And what memorable episodes! There was the time Bernadette Peters appeared as a prostitute spray painting her clients blue as the city dealt with a blizzard, the time that everyone tried to steal his Stetson and the time John Carradine appeared as...well...Dracula! Lots of great guest stars appeared including Sebastian Cabot, Stefanie Powers, Roddy McDowall, Richard Haydn, Eddie Albert, Lee J. Cobb, Lloyd Nolan, Steve Allen, John Denver, Jack Cassidy, Danny Thomas, Joan Blondell, Jaclyn Smith and the wonderful Chief Dan George. The shows were played straight with the laughs coming from the Marshal's indomitable spirit and inevitable down home homilies ("like a Western Charlie Chan" wrote one author). At its peak, the supporting cast also included Diana Muldaur (the only time I ever actually found her sexy) as Sam's girlfriend, Terry Carter (BATTLESTAR GALACTICA)as Sam's partner, Terri Garr, Della Reese, Sharon Gless, Ken Lynch and Sidney Clute. A much later TV movie reunited much of the cast but the magic, as usually happens, wasn't there, nostalgia being the prevailing factor.You can still find the magic on the recently released DVD set, however. Weaver, himself, was on record as saying that McCLOUD was the best time he had in show business. It certainly was a nice ride for viewers. " 'Ere ya go, Chief!"
Posted by Booksteve at 9:31 AM