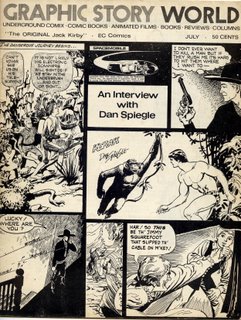 What you see pictured here is one of the single most influential pieces in my Library’s collection. This 1971 issue of Richard Kyle’s GRAPHIC STORY WORLD was the very first fanzine I ever saw. Kidd’s Book Store in downtown Cincinnati, Ohio was a staid old bookstore run by older men in suits but in their basement was the equivalent of a head shop! Abbie Hoffman and Jerry Rubin shared the shelves with Terry Southern and Peter Max and an actual rack of undergrounds was over by the checkout desk. That desk, by the way, was generally manned by two very mellow, long-haired gentlemen in jeans (one with a beard!) and a sexy young lady one would have to refer to as a "hippie chick." In time, they grew to appreciate my relative maturity (I was 12 at the time) and let me hang out and even occasionally purchase some comix or a Vaughn Bode paperback. Over time, they would carry all of the best books on comics, lots of fanzines and every single weekly issue of THE MENOMONEE FALLS GAZETTE but to me the most fateful purchase was this issue of GSW.
I was amazed that there were things like fanzines at all! This one covered a lot of ground, too, reporting on undergrounds 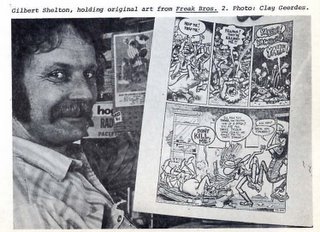 (including this vintage pic of Gilbert Shelton), foreign comics albums (in fact, according to the always reliable Wikipedia, Kyle coined the term "graphic novel" to identify the European comics albums),

comic strips and featuring a cover featured interview with an artist I’d never even heard of (but who went on to be a favorite), Dan Spiegle. (The interview was conducted by Dan Gheno who is referenced by Mark Evanier just today as having a letter published in today’s NEW YORK DAILY NEWS.) In fact, the biggest mainstream piece in the issue was a 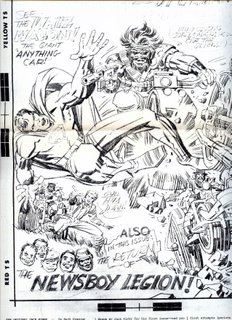 centerfold of Jack Kirby pencils from his still fresh JIMMY OLSEN run. If Kirby’s fourth world series had drawn me back to comics (as previously told) then fanzines cemented that connection. In the back there was a smallish ad for an entire newspaper for comic collectors, THE BUYER’S GUIDE FOR COMIC FANDOM. I signed up and my first issue was number 17 with a cool Klaus Janson cover of Kirby’s Lightray.

That free, lifetime subscription didn’t last beyond that issue, though, as publisher Alan Light had to start charging. Not much, though, and the content continually increased until the paper was sometimes in multiple tabloid sections! I would be a subscriber throughout Light’s run and well into Don and Maggie (no relation) Thompson’s tenure as editors, reluctantly giving it up some 25 years after that first subscription issue just because I could no longer find the time for it. 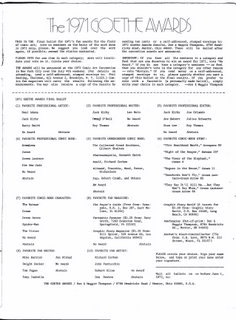 Speaking of Don and Maggie, this issue of GSW also featured their ballot for the 1971 Goethe Awards as reproduced here. I never did find out who won! Anyone out there know? As far as GRAPHIC STORY WORLD, it soon changed its name to, if I recall correctly, WONDERWORLD. I followed it for its remaining lifetime but my interests moved toward TBG, RBCC, THE COLLECTOR and COMIC CRUSADER. Then I discovered the EC fanzines. Then...well, lots more stories there. This issue of GSW deserves its special place in the Library, though, if only for reigniting my sense of wonder. Thanks Mr. Kyle!
Posted by Booksteve at 1:51 PM