You're a Good Man, Charlie Brown

The only version of the play YOU’RE A GOOD MAN, CHARLIE BROWN that I ever saw was the February, 1973 Hallmark TV presentation seen here, in spite of the fact that I was brought in as a technical consultant 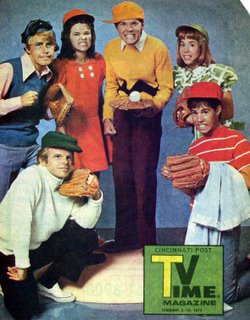 on a 1973 school play version! This version was enjoyable, though, with Wendell Burton (already a familiar face from the movie A STERILE CUCKOO) as Charlie Brown, a role he had played originally in the musical’s San Francisco run. Perhaps the most controversial casting was that of Barry Livingston as Linus. His was a too-familiar TV face as he had just finished his long run as "Ernie" on MY THREE SONS and taking off the glasses, unlike Clark Kent, was not enough to hide his identity. As you might suspect, Bill Hinnant, Snoopy from the original cast, steals the show.
Off Broadway, the original Charlie Brown had been Radar! 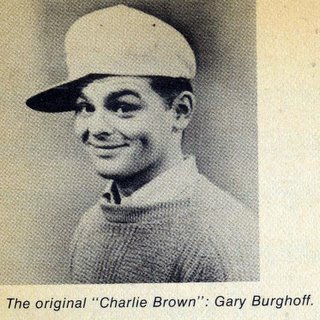 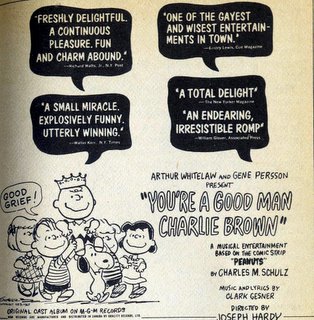 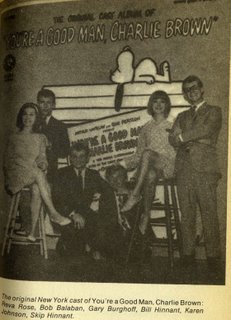 Note also the cast presence of Skip Hinnant and Reva Rose. Skip would go on to voice yet more comic strip characters including the X-Rated FRITZ THE CAT in both films and the ever-popular Pogo Possum in I GO POGO, the ill-fated claymation-style feature (ill-fated because it’s "major" release was on home video exclusively through Fotomat drive-ups! Later Disney bought it, screwed it up with edits, retitled it and dumped it in the WalMart cheap bins. Sigh.) Reva Rose became a familiar TV commercial face (as well as appearing on the underrated sitcom, TEMPERATURE’S RISING) and reunited with Hinnant as the voice of Fritz the Cat’s "old lady" in THE NINE LIVES OF FRITZ THE CAT.
In the eighties, a one hour animated version of the musical appeared and in the nineties, a revamped, re-written and re-ordered version of the play returned, this time with an inappropriately politically correct ethnic cast including B.D. Wong as Linus!
Back in ’73, my woodshop class was doing the sets and props for the 9th grade presentation of YOU’RE A GOOD MAN, CHARLIE BROWN and they were doing them all wrong, painting Lucy’s psychiatrist booth, for example, with childish misspellings and making Snoopy’s doghouse with no flat roof for him to lie on! After I kvetched enough, I was allowed to be "official" consultant, bringing in strips and paperbacks for reference and, in all likelihood, saving the whole play by having us make the sets to look like they SHOULD have looked! I can’t recall why I didn’t actually see it (although I believe I did sit in on part of a rehearsal). 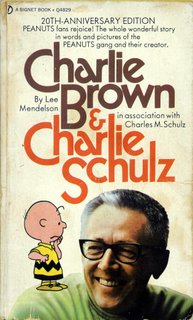 For a brief but good overview of the play’s beginnings, check out CHARLIE BROWN AND CHARLES SCHULZ, one of several marvelous behind-the-scenes PEANUTS books done by cartoon producer Lee Mendelson over the years.
Posted by Booksteve at 10:47 PM