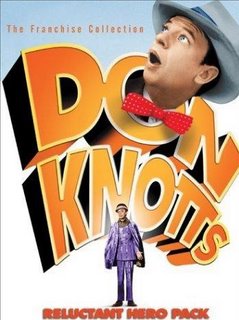 By now you’ve heard of the deaths of Don Knotts and Darren McGavin, both of whom, ironically, starred in the 1976 Disney comedy NO DEPOSIT, NO RETURN. My friend Bob Hastings appeared in that film also and we once spent some time discussing how an ocassionally tipsy David Niven would "hold court" on set regaling all and sundry with great tales of old Hollywood. Few of Bob’s scenes involved Knotts or McGavin, though. Since we as a society seemingly have to pigeonhole people, after a lifetime of great performances, Darrin McGavin is being remembered for A CHRISTMAS STORY and THE NIGHT STALKER and Knotts as a beloved figure best known for THE ANDY GRIFFITH SHOW and THREE’S COMPANY. I find the latter a bit tragic. You’ll get no argument from me that Barney Fife was one of early television’s greatest creations but, I’m sorry, Don’s talents were sadly wasted as Ralph Furley in a one note sitcom already past its prime on his arrival.
No, I think we should remember Don Knotts for his starring vehicles. As one of those comics (along with Bob Hope, Danny Kaye and Joe E. Brown among others) who made films that were uniquely theirs, based on character and personality traits already well familiar to the public, Don Knotts left us with an enoyable batch of family-friendly films beginning in 1964 with THE INCREDIBLE MISTER LIMPET. This absurd, partially animated comedy starred Don as a man who becomes a fish. Knotts brings a real human element to the role and thus has made it a cult film threatened in recent years with the prospect of a remake. 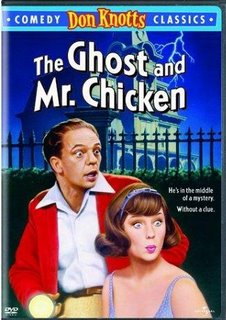 THE GHOST AND MISTER CHICKEN was the first "real" Don Knotts film, though. It took all that was good and familiar about the Barney Fife character and transferred it into an everyman type, then set the whole thing up in an exciting but not too scary haunted house mystery. Throw in Vic Mizzy’s memorable, inimitable music and this became one of my absolute best memories of early filmgoing! In fact, my parents and I saw it twice as it was held over in those days before months long theatrical runs. Backed up by a bunch of behind the scenes folk from the Griffith show and some great character actors of the period (including Charles Lane, Dick Sargent, Liam Redmond and George Chandler) there’s nary a misstep as the suspense builds to a most satisfactory surprise ending. I’d have to say this was one of my favorite films a s a child.
That said, it was only natural that I would follow Don into his later endeavors including: THE RELUCTANT ASTRONAUT, THE SHAKIEST GUN IN THE WEST, THE LOVE GOD? and HOW TO FRAME A FIGG. Actually, there’s no "including," that’s actually pretty much it for Don Knotts’ starring vehicles. By that time the young mavericks of Hollywood were making EASY RIDER and THE GODFATHER and even DEEP THROAT was considered "chic." Family films were definitely on the outs. Thus Don sought logical refuge in the last bastion of wholesomeness, Disney! Four years after his last starring role, Don Knotts turned up at the mouse factory teamed with Tim Conway in secondary, scene-stealing roles in THE APPLE DUMPLING GANG. This led to regular sidekick appearances in NO DEPOSIT, NO RETURN(1976), GUS (1976), HERBIE GOES TO MONTE CARLO(1977) and HOT LEAD AND COLD FEET(1978). After that, Knotts and Conway reteamed for THE APPLE DUMPLING GANG RIDES AGAIN and this time they kept the team going in a pair of non-Disney comedies, THE PRIZE FIGHTER(1979) and THE PRIVATE EYES(1981). Except for a few early small roles, cameos and always welcome voiceovers, Don’s only other major role in a movie was that of the pivotal, iconic TV repairman in PLEASANTVILLE with Tobey McGuire.

I can’t imagine a point where we won’t be able to turn on a TV and revel in the comic timing of Don Knotts as Barney Fife but let’s not forget that for an all-too-brief period, Don Knotts was also a movie star!
Posted by Booksteve at 8:49 AM