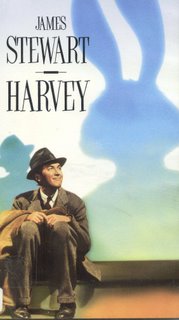 The other day my nine year old GOOSEBUMPS-loving TWILIGHT ZONE fan son asked me to find him a fantasy movie that was not too scary. I pulled a rabbit out of my hat and offered him HARVEY. The 1950 film HARVEY was based on a Pulitzer Prize winning Broadway play and starred James Stewart in his favorite--and certainly one of his finest--roles as the gentle Elwood P. Dowd whose best friend and drinking buddy happens to be a 6 foot tall invisible rabbit. I watched it with him and we waited impatiently for the scene I remembered at the end where you actually saw the rabbit...only to have it never arrive. Based on the IMDB message boards, I'm apparently not the only one to THINK I saw the rabbit but there is no rabbit! The illusion is built up throughout the picture so that in the end, you honestly believe in Harvey...but you don't actually see him. 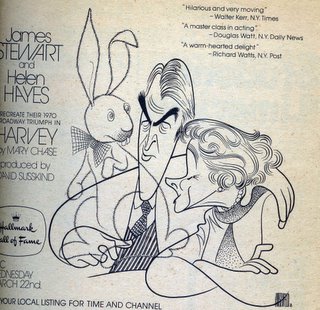 The play was revived and Broadway two decades later and re-created in a Hallmark TV special starring Stewart and the First Lady of American Theater, Miss Helen Hayes, on a career upswing since winning the Oscar for AIRPORT. This was where I first met Harvey. Maybe this was where we saw Harvey. Maybe not. The point is Harvey is there whether or not you can see him. It's good to have a friend that you know will always be there.
Posted by Booksteve at 8:33 AM