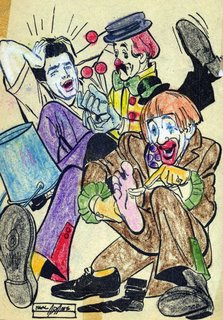 Those of you who were here yesterday (and if you weren't where the heck were you? We had lots of cool new posts!) know that I was off from work sick. Well, I'm feeling much better now after seeing my doctor, Ben Casey. Actually the pic seen here comes from a mid-sixties coloring book that I no longer have in toto. It was called something like PARADE OF COMICS and featured many of the top newspaper strip artists of the day including Charles Schulz, Jerry Robinson,Bud Blake and Alfred Andriola. Each was given three pages for original illustrations having to do in some way with a parade. This one was colored (perhaps by me, perhaps not. Who remembers?) but hey, whaadaya want? It WAS a coloring book after all! Anyway, before revitalizing BATMAN, Neal Adams utilized his advertising art realism on the comic strip version of the hit medical TV series, BEN CASEY. I've never really read a lot of it but it must have been good because it outlasted the series itself by several years. Neal became such an icon in his day that I was at San Diego one time in the late eighties and word spread through the crowd that Neal was in the room .Suddenly hundreds of folks of all ages were flocking around a tiny table where Adams, not even a featured guest that year, had set up shop to hold court and sketch. I was only able to get a good look at him by standing up on a table briefly myself but there he was, bigger than life. Neal's been somewhat controversial over the years but no one can deny his vast influence on comics art and storytelling. If Ben Casey had flopped, things might have happened a lot differently in comics over the last 4 decades! Thanks, Doc!
Posted by Booksteve at 9:39 AM