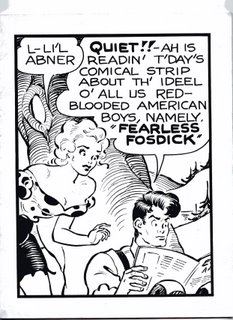 The Cartoon Show was, in fact, a travelling museum exhibition which I saw at the Taft Museum in Cincinnati in 1978. Touting "Original works by 100 outstanding American cartoonists" it attempted a cross-section of comic strips, comic books, magazine panel cartoons and animation art but still 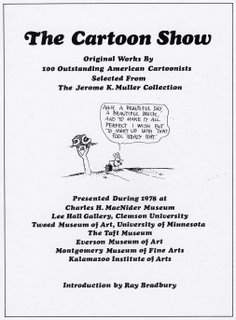 ended up concentrating mainly on the more universally popular newspaper strips. In fact the comic BOOK art consisted of the Kirby piece I posted yesterday, a Dan Adkins SUB-MARINER page, A Crumb page and illustrations by Joe Shuster, "Bob Kane" and John Romita, Sr. That's it. No Ditko, no Steranko, no Wolverton, no Wood, no Kurtzman, no...well, you get the idea. Still, you can quibble with what WASN'T represented but the pieces that were there were fascinating. The L'IL ABNER panel at left is the cover of the catalog they put out that featured a loving intro by Ray Bradbury. Also depicted here is a section of a Frank Frazetta strip 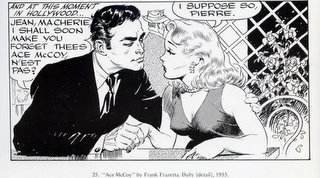 that I stared at forever. Just amazing! A couple Warren Tufts strips 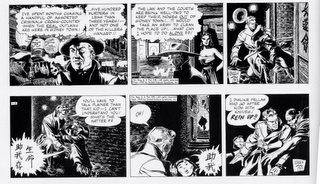 and a signed TOONERVILLE TROLLEY panel 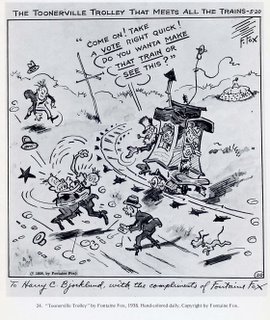 are just a few of the delights of the catalog as well as the long over exhibition. I spent hours there looking at some of the first original art I ever really had the chance to see and it was hanging on museum walls! I TOLD my parents comics were art!
Posted by Booksteve at 8:47 AM