The Magic of Kirby 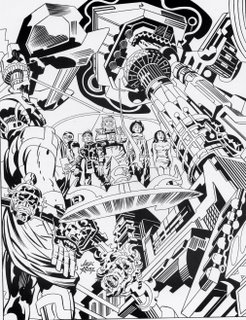 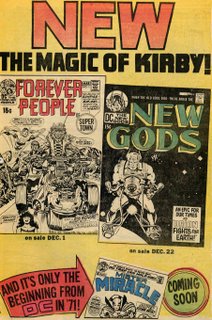 I don't think this necessarily occurs anymore but, back when I was a kid, there came a time when you were expected to give up comic books in favor of sports, junior high and...well, girls. It's just the way it was done. I guess my generation was one of the first to protest that particular ritual of life but that doesn't mean our parents didn't push it. With me, it started in late 1970 when I was 11 years old and at first I didn't fight it. I was ready to "grow up." Since Carmine had taken over at DC, I felt that their comics had suffered greatly in quality. Who in their right mind would put Mike Sekowsky in charge of a book and then let him--no! Encourage him!--to screw up anything and everything the fans liked about it? Thus we got a powerless WONDER WOMEN playing Mrs. Peel to her ancient Chinese secret, "I Ching," the "New, Hunted METAL MEN" with their rubber human masksand SUPERGIRL in a succcession of badly designed new costumes. UGH! Meanwhile, at Marvel things weren't much better since Jack Kirby had left and taken his staggering imagination with him. Steranko had drifted away, also and Ditko was already long-gone. Then I saw this DC ad. In those pre-fan press days, news didn't travel quite as fast. I knew Jack Kirby had relinquished the FF and I vaguely recalled reading of a California move but I had no idea he was about to turn up at DC until this ad. Even though I found myself purchasing less and less of the newly price-increased comics in those days, I made a point of grabbing Jack's JIMMY OLSEN and then THE FOREVER PEOPLE. I didn't read the latter, however, tossing it aside on the coffee table with various issues of NATIONAL GEOGRAPHIC and some S&H stamp booklets. Then one day I saw the edge sticking out and I read it finally, meeting Mark Moonrider, Beautiful Dreamer, Big Bear, Vyken (the Black) and Serifan for the first time. I was hooked again. There was something otherworldly about Kirby's prose, something exciting about his storytelling and, in spite of Vinnie Colletta's much-maligned rerputation, something comfortable and amazing about the King's art. I began seeking out all things Kirby and peripherally, other comics that now looked better than they had been looking before. My parents gave up on the notion that I would ever give up comics and I haven't. That's the true magic of Kirby!
Posted by Booksteve at 11:31 PM