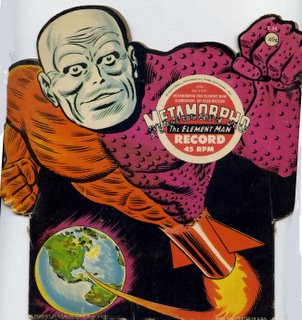 METAMORPHO ran for a total of 22 issues in the mid-sixties and that’s if you count his two BRAVE AND THE BOLD tryouts, his two B&B team-ups and his one JUSTICE LEAGUE OF AMERICA guest shot, all of which are reprinted in one of DC’s recent SHOWCASE PRESENTS volumes. Apparently he was quite popular at one point though as there was also the children’s record seen here (and later re-released in the seventies on an album with other DC super hero records) as well as an intended (but as far as I know never done) cartoon series as advertised in DC comics of the day.
As far as the series itself, there was a certain amount of sixties camp, particularly in the dialogue and the humorous introductory panels of each issue. Bob Haney, a writer who never let continuity get in the way of telling a good story, created the character and wrote nearly all of his original appearances. Personally, Rex Mason, the soldier of fortune who becomes the Element Man, always reminded me of Ben Grimm. His girlfriend was flighty socialite Sapphire Stagg whose overbearing, power-hungry millionaire scientist father (think Claude Rains mixed with Edward Arnold) 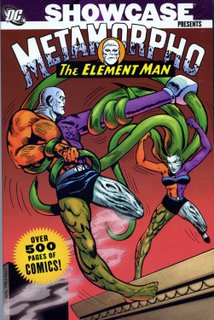 funded Mason’s expeditions. The other regular was Java, a Neanderthal man Rex had found frozen in ice on an expedition before the series even started (nice touch. The characters had a life before we met them). Simon Stagg had revived him and trained him as an all-purpose servant. Stagg was a fascinating character as he wasn’t technically a villain but his power madness caused him to act that way frequently, particularly when it came to utilizing Metamorpho for his own ends. At the same time, he tried to please Java who was jealous of Sapphire’s love of Mason in spite of the deformities his powers caused him. 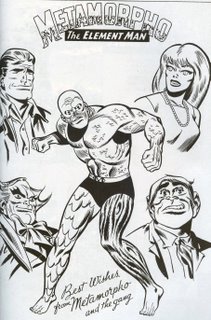 Ramona Fradon, one of the few women comics artists of her day and the long-running artist of DC’s AQUAMAN defined the characters with her early pencilling while long-time BATMAN inker Charles Paris joined on inks for most of the series. As a youngster I of course, missed the connection but now I see a very definite Milton Caniff influence in her style which is here given a unique turn with Paris’s well-honed Chester Gould look. In fact, I was surprised to see that Fradon left the series after issue 4 because her replacements, EC’s Joe Orlando and Sal (who REALLY drew this?) Trapani continued her style almost slavishly at least as far as the characters went. Since artists were rarely credited on the book, I just presumed until yesterday that Fradon had drawn most of the issues! Only the final issue with its unattractive, ultra-sketchy art by Jack Sparling (for whose work I have developed some respect over the years but still don’t care for his comics art) looked at all different.
The stories are all entertaining but many of the early ones are repetitive. Later on they even introduced, as was apparently required in the sixties, a female version in the form of Element Girl (who would recieve her own surprising revival in Neil gaiman's SANDMAN of all places!) Assuming Haney knew what he was talking about, the various elemental references actually make the series educational. Another aspect that I had totally forgotten was Metamorpho’s costume that appeared briefly in 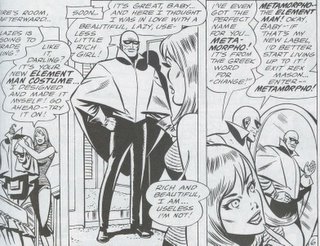 his second and third appearances (See inset).
In the end, though, the series was perhaps too unique for its times (and company). After his cancellation, METAMORPHO remained off-scene for several years before turning up in a series of totally forgettable back-up fillers in ACTION COMICS. Later on, he finally said "Yes" to the Justice League and like most nostalgically viable characters, underwent several other pointless revivals. I congratulate DC on choosing Element Man for this early reprinting. This bodes well for seeing volumes of METAL MEN, SUGAR AND SPIKE and INFERIOR FIVE on the shelves at Borders before we know it! Thanks, DC!
Posted by Booksteve at 6:11 PM